Book Review: Lord of the Vampires 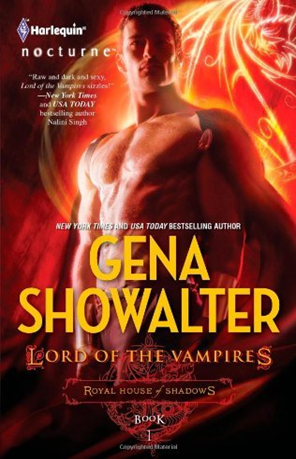 Once upon a time…the Blood Sorcerer vanquished the kingdom of Elden. To save their children, the queen scattered them to safety and the king filled them with a need for vengeance. Only a magical timepiece connects the four royal heirs…and time is running out.

Nicolai the Vampire is renowned for his virility, but in a cruel twist of fate “The Dark Seducer” has become a sex slave in the kingdom of Delfina—stripped of his precious timepiece and his memory. All that remains is a primal need for freedom, revenge—and the only woman who can help him.

When the wanton vampire summons Jane Parker, she is helpless to obey. She's drawn to his dark sexuality and into his magical realm. But for this human, all is not a fairy tale. For saving Nicolai could mean losing the only man she's ever craved...

My thoughts:
Gena Showalter is a legend in the Paranormal Romance world and when I saw her name on this book, I didn’t even look further – I wanted to read it!  And once again I wasn’t disappointed.


Jane is a scientist, with a secret past, that is still recovering physically and mentally from a car accident that left her an orphan.  When she receives a mysterious old book on her doorstep, she is magically transported to a different time and place where she meets the vampire, Nicolai.

Nicolai is a prince with no memory of his past.  All he knows is that Jane will help him be free of the enslavement he finds himself in.

Our couple, Jane and Nicolai, fit together perfectly.  From the start the chemistry was sizzling and you couldn’t help but root for them.  They “found” each other emotionally very quickly but I didn’t feel that this was a far fetched scenario – it just felt right.

Unfortunately Nicolai did have the tendency to turn into a mumbling cave- (vampire) – man whenever he got turned on.  “Mine” might have been overused a few times.  Luckily this didn’t faze Jane . . . and if you promise not to tell anyone . . . it is kinda sexy.   Who doesn’t want their love-one to refer to them as “mine” once in a while?

The scales are stacked against Jane and Nicolai and they find trouble in all forms around every corner!  The world they live in is not described in much detail but as this is only the first in the series, I am sure we will be learning more about it in future books.  Magic, however, is a big part of the story and it was easy to get overwhelmed.  Sometimes it was hard to keep up.  Luckily Nicolai is no novice when it comes to magic and he was able to stand up to everyone.

I love Gena Showalter and once again fans will have foolish grins on their faces when they read Lord of the Vampires.  Just a word of warning – the heat meter on this book might burn you!