Authors bio:
Artemis Hunt has a husband who thinks all fiction is nonsense and all writers of fiction should get their heads checked for situational delusions. At any one time, they have 16 to 20 dogs, many of suspicious virtue.
Artemis frequently wishes she has telekinesis, so she doesn't have to lift a finger to change the room temperature. She's constantly glued to her computer, which serves as her gateway to her friends, books, movies, TV serials and sometimes husband, even though they're sitting on the same bed two feet apart.
Artemis writes under the name of A.R. Hunt for the adult thriller and suspense genre. 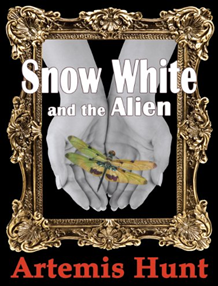 That's how folks describe 16-year-old Snow White, who is more interested in studying insects than her own beautiful, anemic face. When her bipolar stepmother sets a price on her heart, which she'd like served with baby potatoes and Chianti, Snow White has no choice. She must say goodbye to the only people who have ever loved her – her three-chinned nanny, who feels like a pillow, and her childhood friend, Tom, who has spent his life wearing a thick, fleshy armor to fend off her princessy barbs.

Snow White must outwit every studly huntsman, assassin, city guard and robber baron sent to bring her back, preferably dead, before she reaches Lapland.

20-year-old Aein is a one-winged cripple from another planet. Passionate, ridiculed, headstrong, and considered hideous in his gossamer, aerial world, he desires nothing more than to prove to his royal family that flight and beauty are overrated. He gets his one chance when he is selected to go to Earth, disguised as a 'Crawler' – who appears to us as a phenomenally handsome human youth. His mission: to pave our world for colonization and, later . . . annihilation.

The first native he stumbles upon is the fugitive Snow White.

Snow White and Aein must choose their allegiances, and fight a forbidden, growing love for each other before their worlds explosively collide.


Let us get to know Artemis better.

When did you start writing?
When I was 3. I drew naked pictures on a sketchbook and added little stories to them. No, I swear I'm not a deviant!

How long does it usually take you to write a book?
It depends. There was one book that I wrote within a month. Most of the time, I take 6 months in all - first draft, 1st rewrite, 2nd rewrite.

What inspired you to write this book?I watched 'Tangled', the movie, and I was so in love with it I wanted to do something similar. Then I realized there are no less than two SNOW WHITE movies coming out in 2012, one starring Kristin Stewart and the other Charlize Theron, no less!

What kind of research did you have to do?Mostly about medieval costumes and insects. (Not medieval insects, since I'm sure none of them have gotten extinct yet! In fact, they seem to be getting more plentiful, at least in my house.)
I had to research insects because my Snow White is an entomologist! Yes, she's also the fairytale princess, but even fairytale princesses have to have a job!

What is your next project?I already uploaded it. It's a short story called Psychotic, which was previously traditionally published in my bestselling 2005 collection, Dark City. I'm releasing this under my adult label, A.R. Hunt. It's extremely adult! Search for it in Amazon, read the blurb, and you'll understand why.

Mmmmm, fairy tales and adult fiction . . . what a repertoire!

A typical day in your life would be?
Go to work. Beat the jam. (Moan.) Try to cram in a little writing during the job since no one ever knows what I'm doing, haha. Cram in more writing during my lunch hour. Check my Amazon rankings. Sigh copiously. Get back to work. Go home. Beat the jam. Socialize with the husband and the dogs.

What is the hardest thing about being an author?Trying to be one while holding down a full time, very stressful job! But I've got bills to pay. (Sighs copiously again.)

Do you hear from your readers much?  What do they say?
Over the years? I run newspaper columns as well, and I get emails asking me about this, and that. I reply to every email. On my fiction, I get the occasional email.

Who are some of the authors that inspire you?
I love great storytellers. JK Rowling. Suzanne Collins. Anyone who tells a good story.

And your own TBR pile?
I'm currently reading Wither by Lauren DeStefano. I have Forest of Bones and Teeth waiting. Across the Universe by Beth Revis.


We have the same books in our TBR piles – lol


** Giveaway **
I am so happy to be able to tell you that Artemis has offered you a chance to win a .mobi copy of Snow White and the Alien.  You can leave a message for Artemis in the comments and I will draw a lucky winner on 07 October 2011.  She will contact you with your prize!

Here are some links if you want to see more.

This is the book on Amazon
http://www.amazon.com/Snow-White-Alien-ebook/dp/B005IHALMC/ref=pd_rhf_p_t_1

My (always in construction because my lazy husband won't finish it) website is at www.artemishunt.org

Thank you so much for chatting with us today, Artemis.