Another dystopian book for me to drool over – this one will only be released in 2012 and it sounds amazing!

I am so glad that there are so many to choose from these days.  Yay!! 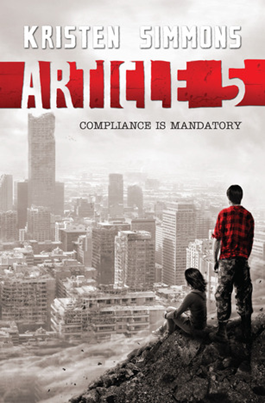 New York, Los Angeles, and Washington, DC have been abandoned.

The Bill of Rights has been revoked, and replaced with the Moral Statutes.

There are no more police — instead, there are soldiers. There are no more fines for bad behavior — instead, there are arrests, trials, and maybe worse. People who get arrested don’t usually come back.
17-year-old Ember Miller is old enough to remember that things weren’t always this way. Living with her rebellious single mother, it’s hard to forget that people weren’t always arrested for reading the wrong books or staying out after dark. That life in the United States used to be different.

In the three years since the war ended, Ember has perfected the art of keeping a low profile. She knows how to get the things she needs, like food stamps and hand-me-down clothes, and how to pass the random home inspections by the Federal Bureau of Reformation. Her life is as close to peaceful as circumstances allow. That is, until her mother is arrested for noncompliance with Article 5 of the Moral Statutes. And what’s worse, one of the arresting officers is none other than Chase Jennings…the only boy Ember has ever loved.
Posted by Unknown at 06:35