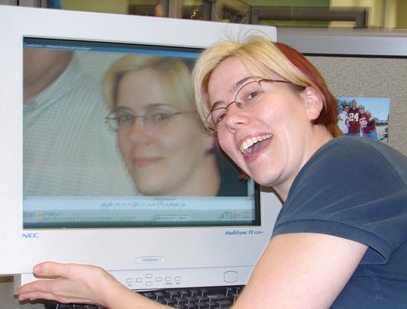 When asked why I write, I usually stutter out a made up answer that I can't remember three seconds later.  I can't remember the very first time I decided I wanted to write, it's just something I kind of always did.  I wrote really bad poems as a kid, then horrible short stories as a teenager and then passable plays in college.  I'm an adult now (and nothing you can say can make me change my mind about that) and hopefully my writing has progressed with my age.  When I'm not spending my time with made up people in made up places doing made up things - some would call it lying- I'm generally reading, running, watching sports, drinking good beers  and eating too much food with the hubby.  I'd love to tell you I'm a mountain climber or an astronomer or something cool like that, but I'm not that cool.  In truth, some would say I'm nerdy.  But the Dr. Who poster above my computer would beg to differ.

Hey, being nerdy is very cool!

When did you start writing, Libby?
I started writing seriously in college. I was studying acting but was far more interested in rewriting plays than in learning lines.

You wanted to be an actress?  Wow, that is really cool too!  lol
How long does it usually take you to write a book?
Right now, about a year. I have to write around my work schedule.

I know, work always interferes, doesn’t it!  What inspired you to write this book?
This is a group of short stories, the motivations for which were varied. Thank You For Calling and The Last Six Miles were heavily influenced by my time as a call center worker and a runner. Fourth Degree Freedom came to me in the form of a single sentence, "My son is a monster." She Floats started as a dream I had one night, a very creepy dream. The Event was the result of reading a lot of dystopian fiction and working with an elderly population.

I always find it so strange how stories comes into being!  It is amazing how one’s imagination works!
What kind of research did you have to do?
I didn't have to do much research at all. Most of the stories were in my wheelhouse, or were completely from the land of fiction. I got off easy that way. I've done plenty of research for other stories and novels. It's necessary and a great way to procrastinate.

Hey, you can tell me nothing about procrastination!  I am an expert!
Tell us a little about a typical day in your life.
I wake up around 6 am and work out. I work the day job from 9 - 6 with a one hour break for lunch/workout. Then it's home to the hubby and dinner and one to two hours of writing at night time. I then read until I pass out.

What is the hardest thing about being an author for you?
Writing is all about discipline. No one is there to force you to sit down and write. It's not like a job where either you show up and work or you're fired. It's difficult making yourself write when you'd rather be sleeping or socializing. You just have to make yourself do it.

I agree – it is much harder doing anything when someone is not looking over your shoulder! Do you hear from your readers much?  What do they say?
Most of the readers I've heard from are also followers on my blog. I post flash fiction every Friday and I encourage feedback. Their comments have been mostly complimentary with one or two wondering where the ideas came from. I haven't gotten any comments that have been too strange yet.

Just wait, the longer you write and the more famous you become, the weirdness will start!  lol  Who are some of the authors that inspire you?
Favorite authors include: Virginia Woolf, August Strindberg, Eugene O'Neill, Terry Pratchett, Neil Gaiman, Harold Pinter, Edward Albee, Muriel Spark, Brock Clarke, and a host of others. Most influential, probably Dr. Seuss.

What is in your own TBR pile?  Is it as humungous as mine?
More books then I can count right now! I'm reading Haunting of Hill House and Twenty Thousand Leagues Under the Sea currently. I have Drood, Temple of my Familiar, War and Peace, and several Discworld novels ready to go in the near future. That's not counting what's on my kindle. :)

I have to admit, I have not had the nerve to read War and Peace yet – maybe someday!

Libby has published three books so far and you can see them below. 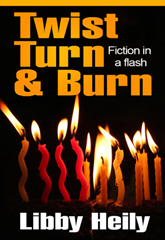 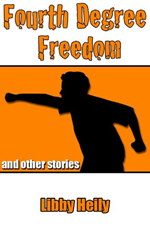 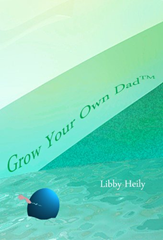