I don’t usually feature poetry on my blog, so I thought it would be fun to have a poet to educate us a bit :)

There are many niches and sub-niches within the world of Modern Poetry.  The element that distinguishes my work from many others is a longing for The Beautiful, which I find to be extremely rare in the 20th and 21st centuries.  The Mediterranean, specifically Italy and Greece, is 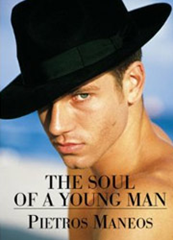 also a pervasive motif in my Poetry, which is consonant with the fact that I am of Italian and Grecian descent.  In fact, much of my poetic sensibility was formed during my Grand Tour of Italy at the turn of the century.  I've often heard the comment, 'I generally don't read or enjoy much Modern Poetry, but I love your Poetry.'  And I think this sentiment springs from the above statement regarding my desire for Beauty coupled with the nascent revival of Romanticism in the modern world, in general.  I definitely appreciate you taking the time to showcase my work, and encourage all of your readers to visit my recently launched website, http://www.PietrosManeos.com to read more of my Poetry.


The Immortal Greek Spirit
“From now on we shouldn’t say that the Greeks fight like heroes but the heroes fight like the Greeks.” – Winston Churchill

Until the blood from my pen runs dry, I shall worship the Greek body, the Greek mind and the Greek soul.
Until my tears land upon Greek soil, I shall forever live in exile.
In the Thracian hills, my Greek spirit shall rise.

My strong soul shall spear the Persian hordes.

They shall feel the wrath of the Greek soul – Yes, that immortal soul.
Under Thermopylae’s hot gates, Spartan valor will reign supreme.

In Aegina, I shall sleep in beds of olives,
And on the silver beaches of Naxos, I will dance until dawn with noble peasants.

In the Corinthian countryside, the moon’s fire shall awaken my Greek spirit.
In Paros, my bold blood shall be replaced with rich wine,
And in Sifnos, my carnal lips shall be the playthings of Greek goddesses – we shall worship Dionysus in the dark lustful hills.

From the peaks of Mount Olympus, I shall hoist old rocks until I am proclaimed a pagan God,
And in Athens, poetry shall be the only language.

Until the blood from my pen runs dry, I shall worship the Greek body, the Greek mind and the Greek soul.

Until my tears land upon Greek soil, I shall forever live in exile.

About:
Pietros Maneos was born in 1979 in the Philadelphia area to a Greek father and an Italian mother. His Grecian side hails from the very village of Sappho – Mytilene, Lesbos – while his Italian side is descended from Magna Grecia, specifically Fragneto Monforte, a town just outside of Napoli.
During his sophomore year of university he took a semester off to travel throughout Italy, a trip that fired his poetic imagination. ‘Without a doubt, it was Italy, and the city of Rome, that nourished my poetic sensibility,’ he notes. Upon his return to America, Maneos received word that his poetry had so impressed an entrepreneurial Roman who was just in the midst of forming a publishing company, that he wished to publish Maneos’ collection, titled – The Soul of A Young Man. Maneos triumphantly returned to Rome in order to finalize the publication. In December of 2001, at the tender age of 21, after just receiving the first copy of his collection, he exclaimed to a friend, ‘My delusions of Grandeur are steadily becoming a reality of Grandeur.’
Pietros obediently adhered to his renunciation until 2005 when he was involved in a torrid love-affair with a betrothed Brasilian beauty. His furious compositions consumed him during the Spring and Summer of 2005, finally finishing in August of 2005. He planned to present the collection – Poems of Blood and Passion – as a present to his now estranged nymph on her birthday in the early part of September. ‘I did not have the requisite time to play the dreaded publishing game of sending the collection to a literary mandarin, awaiting upon their approbation or disapprobation of the work, so I opted for self-publishing, an act that will perhaps permanently scar my Literary Legacy, but so be it, as it was done out of the exigency of Love, and any act performed from Love should surely be forgiven.’

Thank you for being with us today, Pietros and we wish you much success in future!
Posted by Unknown at 05:54