Coming attraction by one of my favourite authors

I can’t wait!  In March 2012 one of my favourite authors is bringing out her next book – Bear Meets Girl.  Mmmmm . . . love the cover, don’t you?  Except for the blurb, she also has an excerpt on her website which I will include so that you can drool with me :) 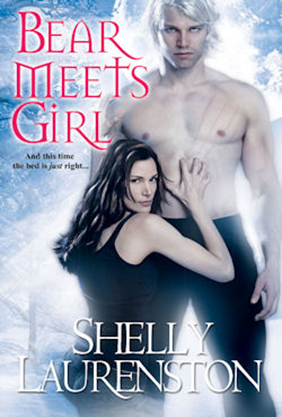 Blurb:
Lou Crushek is a reasonable, mellow, easygoing kind of guy—especially for a shapeshifting bear. But once someone starts killing the scumbags he works so hard to bust, that really gets under his fur. Especially when that someone is a curvy she -- tiger who's bringing his passion out of hibernation...

Marcella Malone is a member of an elite feline protection unit, and Crush is proving one major pain in her gorgeous tail. The only reason she's joined forces with him is to track down the wealthy human who's got her entire species in his ruthless sights. But there's no denying that beneath that big, burly exterior is a man who knows how to rub her in all the right ways...

While the two females found reasons to laugh, Crush finished putting away his groceries and put down food for Lola. That was around the time the laughter stopped.

"I'm fostering for a friend." He whistled and Lola came out of the hiding place she always went to whenever his idiot brothers broke into his home. It used to be his apartment, now it was his house.

Lola trotted into the kitchen but commenced to barking as soon as she saw Malone and Dr. Davis.

The two women looked at him and he shrugged. "She's not a cat-friendly dog."

"You foster this dog?"

He didn't know why Malone sounded so disbelieving. Bears had pet dogs all the time.

"Yeah. You have a problem with that?"

Lola continued to bark so Crush said, "Cut it." She did and trotted over to him, turning and sitting down on his foot while facing the two felines.

Malone and the other woman exchanged another glance and Malone said, "This is your dog."

"Uh-huh. How long have you fostered her?"

The felines began laughing again and Lola snarled at them. That was his girl.

"She's your dog. Your dog. No one fosters a dog for three years."

"A purebred English bulldog?" the woman with Malone kindly asked. Unlike the She-tiger, this woman had basic manners.

"I don't have papers or anything and she's been fixed."

"No one has shown interest in it?"

" 'It' is a her," he snapped at Malone. "And there have been a few interested people but they weren't the right family for her."

"Why are you here?" he barked, fed up with this line of questioning.

"I need a boyfriend or my aunts are bringing in a matchmaker so they can possibly hook me up with a distant relative."

With a snort, Crush picked up Lola and put her in front of her food bowl.

"It means you're insane. I thought you just acted crazy for the crowd. But no" -- he faced Malone, briefly studied her pretty face -- "you're really crazy."

"Crazy's relative," the woman with Malone remarked. When Crush only stared at her she smiled and added, "I should introduce myself. I'm Jai Davis."

Crush tipped his head to the side and studied her. "Jai Davis? Head of the medical team for the Carnivores?"

"You know the head of our medical team?"

He shrugged at Malone's question. "They mention her at the beginning of every game."

"Why are you here?" he barked again, annoyed with having strangers in his house. "In my space?"

Hearing her friend's voice, Malone took a deep breath and said, "I need a favor."

Crush sized the feline up before answering, "No."

"But I haven't even told you what it is yet."

"I know. But I don't deal with crazy in my private life."

Malone crossed her arms in front of her chest, gold eyes locked on him until she snapped at her friend, "And you can stop laughing."

Her hand over her mouth, Dr. Davis choked, and mumbled, "Excuse me," before quickly walking out of the kitchen.

"Thank you very much, cop, for embarrassing me!"

Crush gawked down at the feline, mouth open.

"What are you looking at me like that for?"

"I embarrassed you? Is that what you just said to me?"

"You've been embarrassing me since I met you. It's like your goal or something."

"My goal is to get you to loosen up. You're so uptight."

"Why do you care if I'm uptight or not?"

"Because I'm a caring and giving person."

Imitating her stance, Crush crossed his arms over his chest and stared down at her.

Finally, after a couple of minutes, she finally admitted, "All right, fine. In truth I just like how your face gets all red when I embarrass you."

"Honesty. How nice of you to finally use some."

"If it makes you feel any better, I only torment those I actually like."

"Why would that bit of information make me feel better? That's like saying ‘I only set fire to the ones I love.'"

"It's nothing like that. I just think you take yourself too seriously. Although after meeting your brothers, I can see why you're more tense than most polar bears."

"Really? You're correcting my grammar?"

Frustrated again -- because she was kind of right -- Crush snapped, "It's not like I invited you over here to abuse you about your grammar. You came over uninvited."

"Because I need your help."

"In some wacky scheme?"

"Of course it's not wacky. I just need you to pretend to be my boyfriend so my aunts don't bring in a matchmaker in the hopes of getting me married off to my cousin."

As the feline stated her purpose in coming to his house, Dr. Davis walked back into the kitchen. But she took one look at Crush's flabbergasted expression, covered her mouth, turned, and ran out again, her laughter floating in from his dining room.