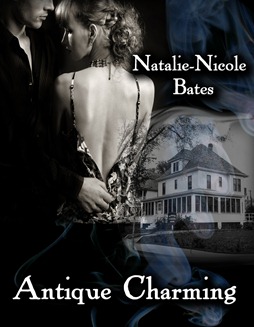 Blurb:
The night he came home…forever

Third-generation funeral director Lizzie Morton is about to have her dream realized. She has purchased the long abandoned Nichols Funeral Home and its upstairs flat, determined to restore the funeral home to its once former glory.

But a late night visitor, Adam Nichols, claims the funeral home still belongs to his family. Lizzie scoffs at his odd behaviour and outlandish claims, but when a vintage photograph appears, she soon realizes, to her horror, that Adam Nichols did once own the funeral home—more than one hundred years ago—and now she has allowed this entity to pass into her home.

She heard it again.

Three taps at her front door.

Lizzie muted the television, tossed the blanket off of her body and scurried out of bed. She slipped her robe over her shoulders and tied it securely, determined to find out who in the world would knock at her door at three in the morning. By the time she had reached the door the week previous, no one was there. The street had been dark and still.

It had to be a mistake. She had only recently closed sale on the long abandoned funeral home, determined to restore it to its once former glory. She had only been living in the upstairs flat for a few weeks.

As she hurried down the staircase, each step beneath her feet creaked in protest. There was no one visible through the peephole. She unchained the door and opened it just enough to peek around it.

No one was there, just like the previous week.

The street was dark and quiet. Not even the whisper of a wind could be detected. Only the cold dampness of the October night raised a chill on her skin.

Who was playing this weekly joke on her? Could it be the ghosts of some departed soul who had passed through the halls of Nichols Funeral Home sometime during the past century? A small smile crossed her lips as she prepared to close and lock the door. She was a third generation Funeral Director. Did she now believe in ghosts?

Before the door could close, a hand poked into the slight space and seized her wrist. A cry rose in her throat and she jerked backward, but the hand held tight and the door flung open.

The man emerged, shrouded in darkness. He was an ethereal creature, tall, and dressed in anonymous black. Only a streetlight glowed behind him.

Author Bio:
Natalie Nicole-Bates is a book reviewer and author.

Her short paranormal romance, Antique Charming, was published by Books To Go Now Publishing in October 2011 and her contemporary romance, Change of Address, is scheduled to be published by Secret Cravings in January 2012.

Her passions in life include books and hockey along with Victorian and Edwardian era photography. Natalie contributes her uncharacteristic love of hockey to being born in Russia.

She currently resides in the UK where she is working on her next book and adding to her collection of 19th century post-mortem photos.