Adding to my Wish List (20): Fateful by Claudia Gray

The blurb for this book has me hooked. Werewolves on the Titanic?? Wow, gotta read this one! 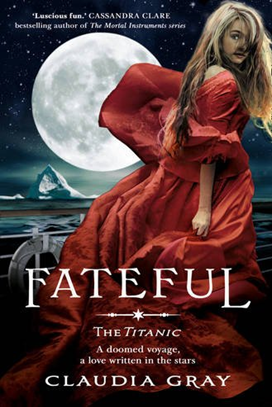 Goodreads blurb:
In Fateful, eighteen-year-old maid Tess Davies is determined to escape the wealthy, overbearing family she works for. Once the ship they’re sailing on reaches the United States, she’ll strike out on her own. Then she meets Alec, a handsome first-class passenger who captivates her instantly. But Alec has secrets....
Soon Tess will learn just how dark Alec’s past truly is. The danger they face is no ordinary enemy: werewolves are real and they’re stalking him—and now Tess, too. Her growing love for Alec will put Tess in mortal peril, and fate will do the same before their journey on the Titanic is over.
Featuring the opulent backdrop of the Titanic, Fateful’s publication is poised to coincide with the 100-year anniversary of the ship’s doomed maiden voyage. It is sure to be a hit among Titanic buffs and fans of paranormal romance alike.