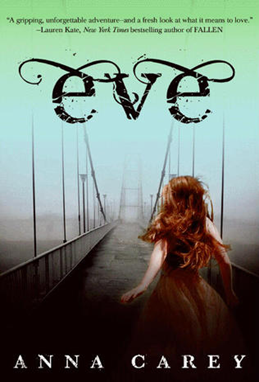 Goodreads blurb:
The year is 2032, sixteen years after a deadly virus—and the vaccine intended to protect against it—wiped out most of the earth’s population. The night before eighteen-year-old Eve’s graduation from her all-girls school she discovers what really happens to new graduates, and the horrifying fate that awaits her.

Fleeing the only home she’s ever known, Eve sets off on a long, treacherous journey, searching for a place she can survive. Along the way she encounters Caleb, a rough, rebellious boy living in the wild. Separated from men her whole life, Eve has been taught to fear them, but Caleb slowly wins her trust...and her heart. He promises to protect her, but when soldiers begin hunting them, Eve must choose between true love and her life.

My thoughts:
Let me begin by saying that I absolutely love dystopian/apocalyptic books and this book did not disappoint.  It is a fast paced rollercoaster ride from beginning to end.

Eve and the girls of her school has been sheltered most all their lives.  They have been drilled that all men are evil and dangerous.  Their king is their only hope and the only respectable man left in the world.  They dream of the day that they will graduate and move to the building across the lake, to begin their new lives, learning the trade of their choice.

Our story begins when a little seed of doubt about her elders is placed in Eve’s ear.  Soon this doubt grows and she decides to investigate.  She finds the horror of the real world just outside the gates of the school in the very building she has been dreaming about entering.  And this horror will be her fate in only a few hours’ time.  A sympathetic teacher helps Eve escape the school and then her new life begins.

Eve is a girl that has to grow up fast.  All that she has been told for as long as she can remember, has been a lie.  There is no one to trust, no one to turn to, no one to help her.  Only a vague hope of a safe haven across the country.

Eve struggles alone in this rough world until she finds Arden, the girl from school that started Eve’s doubting of her world.  Arden fled the school a few hours before her and is much more prepared for the wilderness than Eve.  And she wants nothing to do with Eve – Arden is the typical bad girl, tough and strong.  Eve was a straight A student but out in the real world, it is Arden that keeps her alive.

Caleb comes to the girls’ rescue when soldiers starts looking for Eve.  He is the sensitive knight in shining armour and I loved him.  He escaped his own horror boys-only camp and now risks everything for Eve.  Their love is sweet and romantic although peppered with misunderstanding.

I thought the world Eve and Caleb lived in was very believable.  Not much detail is given of where the plague came from but I loved the little touches from our time that crept into the story now and again.  The characters of Eve and Caleb were very likeable and the secondary characters were strong.  All the elements came together for me to make this a great read but once again, this book lost one star because of the ending . . . I don’t want to spoil the book for you, so I will leave it there.  If you have read my reviews before, you will be able to guess the reason . . . :)  My only hope is that things will be resolved in the second book.

I recommend this book for all dystopian lovers out there.