James Mace, author of Soldier of Rome: The Sacrovir Revolt joins us today and he tell us a little more background on his book. The easiest way to examine the life of a Roman soldier is to look at the potential career of a legionary from day one.

In order to enlist in the legions, one had to be male, at least seventeen years of age, and a Roman citizen. Non-citizens could still serve, but they would serve in the auxiliary forces, which were less trained and equipped, often suffering far higher casualties as a result. However, an auxiliary who completed twenty-five years of service would be granted Roman citizenship upon his discharge and retirement.

Potential recruits were medically screened before being sent off to their units. A period of basic training would follow, which was very similar to what modern day Army soldiers and Marines are put through. Upon completion, the recruits would become legionaries and join their brethren in the ranks. Unlike modern armies where soldiers can elect to sign up for just a few years, when one joined the Roman Army, it was for twenty years.

Adrian Goldsworthy's The Complete Roman Army gives an in depth look into daily life of a Roman soldier. He has part of a duty roster for a unit stationed in Egypt. Soldiers would find their names on the roster and see what duties they had to perform throughout the month. This included simple tasks like guard duty, to less than enviable like having to clean out the backlogged sewage pipes. A legionary could get out of these types of duties if he possessed a specific skill that was in high demand, like blacksmithing or leather working. These soldiers would be placed on what was called immune status, and would work in their specialty while also drawing incentive pay.

The epic battles that made Rome famous only made up a miniscule portion of a legionary's career, if they came at all. It was not unheard of for a soldier to serve out his entire tenure without ever having to draw his sword in anger. When battles did happen, the legionary's discipline, ability to work as a cohesive team, and their vastly superior weapons and armor kept casualties very low. During most major battles, total casualty rates for a Roman Army were around two percent, of who maybe one in five were killed.

There were many advantages to joining the legions. Foremost, it was a steady profession with guaranteed pay. Soldiers' rations were also provided, as were the barracks they lived in. Constant training kept the legionary at a high state of physical fitness. The Romans were also obsessive about personal cleanliness, and a legionary was expected to bathe daily as well as maintain proper dental hygiene. The combination of steady pay, proper nutrition, high physical fitness, and sound personal hygiene gave the Roman soldier a much higher quality of life, as well as life expectancy, than many of their civilian counterparts. 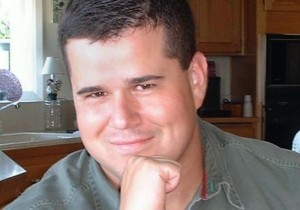 Author BIO:
Since I can remember I have always had a passion for history. My love of Roman history started when I first watched the series “I, Claudius”. I then proceeded to read every Roman book I could get my hands on.

I got my start writing bodybuilding and physical fitness articles for Bodybuilding.com, as well as a lesser-know magazine, HardCore Muscle. I turned to writing historical novels when I was in Iraq. My intent was to write the stories that I wanted to read, but could not find. While we may hear stories about the Emperors and Generals of antiquity, we almost never hear the stories of the men who did the actual fighting under them. Sadly, most historical data is lost, the individual soldiers being long since forgotten by history. My attempt with The Artorian Chronicles is to tell the story of a common legionary and what could have happened throughout his career.

More recently I have turned to other periods in history and have started work on a pair of historical novels about the Anglo-Zulu War of 1879. The working title for the first book is “Brutal Valour”. I’m tentatively planning for it to be released sometime in 2012, along with the fifth book in The Artorian Chronicles, “Soldier of Rome: Judea”.

You can visit James at http://legionarybooks.net

About Soldier of Rome: The Sacrovir Revolt
It has been three years since the wars against Arminius and the Cherusci. Gaius Silius, Legate of the Twentieth Legion, is concerned that 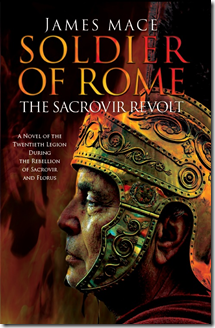 the barbarians-though shattered by the war-may be stirring once again. He also seeks to confirm the rumors regarding Arminius’ death. What Silius does not realize is that there is a new threat to the Empire, but it does not come from beyond the frontier; it is coming from within the Empire’s borders in Gaul. Legionary Artorius has greatly matured during his five years in the legions. He has become stronger in mind; his body growing even more powerful. Like the rest of the Legion, he is unaware of the shadow growing well within the Empire’s borders, where a disaffected nobleman is stirring rebellion to betray the Emperor Tiberius. A shadow looms; one that looks to envelope the province of Gaul as well as the Rhine legions. The year is 20 A.D.
Posted by Unknown at 20:20