Here is a new book for us to pine for!  Isn’t the cover gorgeous!! 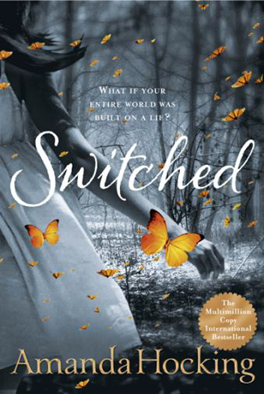 Goodreads blurb:
Switched - the first book in the Trylle Trilogy...

When Wendy Everly was six-years-old, her mother was convinced she was a monster and tried to kill her. It isn't until eleven years later that Wendy discovers her mother might have been right.

With the help of Finn Holmes, Wendy finds herself in a world she never knew existed - a world both beautiful and frightening, and Wendy's not sure she wants to be a part of it.

Pan Macmillan is bringing this book to us – here is what the press release says:

Pan Macmillan is pleased to announce that we will be publishing the million-copy bestselling eBook Trylle Trilogy from Amanda Hocking. The books will be available in all formats for the first time, after being acquired through an intense international auction. The Trylle Trilogy will be published in quick succession followed by the launch of Watersong in September 2012 - the first of a brand new series.

Amanda Hocking is twenty-six years old, lives in Minnesota and had never sold a single book before 15 April 2010. She has now sold over one million. Her books have been a self-publishing phenomenon - according to The Observer, Amanda is the most spectacular example of an author striking gold through eBooks. She has a huge social media presence which will be fully integrated with all promotional activity.

“Her character-driven books which feature trolls, hobgoblins and fairy-tale elements keep the pages turning, and have generated an excitement not felt in the industry since Stephenie Meyer or perhaps even J. K. Rowling”
- THE NEW YORK TIMES