Hi Rebeka.  Welcome to All the days of!!

Let’s see what the blurb says:

For centuries the debate has raged; are vampires real? There has been plenty of myth and superstition regarding vampires but not alot of truth or answers. In a unique piece of work, Bektamun a 3000 year old vampire, puts to rest all the myth and finally reveals the truth about the legendary creatures known across the globe as vampires.

Vampires Revealed is a journey of discovery. Leave behind your preconceived ideas, forget the horror stories and disregard everything you think you know about vampires. Never before have humans had and an opportunity such as this. To know the unadulterated truth, for every question you may have ever had about vampires to be answered.

And now, let’s get to know Rebeka a bit better.

Author Biography
Raised in country Victoria, Rebeka started her writing career working for the local newspaper as a teenager. While she decided not to pur 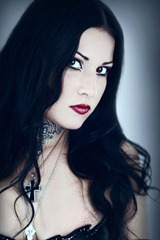 sue this as a career, she has always enjoyed writing and being creative

With so many varied interests and eclectic taste in most things, Rebeka enjoys incorporating all of them in her writing. She particularly enjoys writing about vampires.

Rebeka seeks to define and explain vampires in a way not done before. This has been achieved with her debut title "Vampires Revealed". Following titles will revolve around exploring the world and characters created in her first release.
Currently Rebeka lives in Melbourne with her “demented” but lovable cat, dividing her time between writing and managing a small boutique entertainment agency.

Rebeka, when did you start writing?
RH: I think it was probably during my early years at high school, my teachers encouraged me to study and participate in advanced English and writing courses.
Originally I wanted to be a journalist and I did work as one for awhile. But I can’t honestly say I grew up wanting to be a writer. I’ve always had a spark of creativity, it’s only now I have the time to devote to writing.

How long does it usually take you to write a book?
RH: I’m really good at procrastinating, so much longer than it should :)

LoL – procrastination is definitely alive and well in my world too :)

What inspired you to write this book?
RH: Being a vampire fan and having read more than a couple of vampire books, I found myself wondering about them in detail. I had questions that hadn’t really been answered before. For example; who was the first vampire? How did it happen? What’s their lifestyle like? Do they have laws? What makes vampires tick? That sort of thing and heaps more.
Once I asked myself the first few questions so many more followed and I found a character developing inside my mind to answer them all.  Et voila, Bektamun was born and started telling me all about the history of vampires, along with other characters who help fill in the gaps so to speak.

What kind of research did you have to do?
RH: There was heaps of research needed, particularly in the area of the origins of vampire mythology. I needed to know where the ‘idea’ of vampires sprung from, why it was a universal legend.
Also when trying to explain vampire anatomy, I had to have a good grounding in human anatomy to be able to make comparisons. The hardest was researching how the brain works.
For almost every facet of ‘vampire’ life I needed a human equivalent, so many hours were spent combing the internet for information and historical reference. Actually it was very enjoyable, I learnt a lot along the way.

You have a beautiful cover - who designed it?
RH: Joleene Naylor. She did an awesome job, helping me bring my idea to life. When I first contacted her I had no idea what sort of image I wanted.

What is your next project?
RH: Next up is ‘Desires Revealed’. And before you ask, no it’s not a series. Desires Revealed explores in more details characters and events touched on in Vampires Revealed. Specifically it is about how the Gervais family came to be with Bektamun, how the relationship between her and Nicole developed.
Also I get to have some fun with my evil rogue vampires causing mayhem.

A typical day in your life would be . . .
RH: Coffee and plenty of it throughout the day. First up I like to deal with any of my ‘To Do’ things, reply to emails, waste a little time on Facebook. Then I get into ‘writing’ mode and divide the rest of the day between writing/research and taking care of my business.

What is the hardest thing about being an author?RH: Answering questions like this :) No seriously, the hardest thing for me is waiting for the first feedback. It doesn’t matter how much work you’ve put into a book, until someone says ‘I like it’ you’re not entirely sure you’ve got it right.

I can imagine!  It must be nerve-wrecking!

Do you hear from your readers much?  What do they say?RH: I always love hearing from my readers. So far the response to Vampires Revealed has been overwhelmingly positive. As a writer it is incredibly gratifying and humbling to have people say how much they love and enjoy your work.

Who are some of the authors that inspire you?RH: At last, an easy question.  (lol)  Alexandre Dumas is my prime source of inspiration. His conversational tone and the way he paints characters. In every one of his books, he makes you feel like you would recognize the characters walking down the street. The style of his writing is something I can only every hope to emulate.

And lastly, another easy question (lol)

What is in your own TBR pile?
RH: Way too many books. Several of my colleagues have books out at the moment which I really want to read, including: Dante’s Diary by Andrea Dean Van Scoyoc, Cold in California by Deborah Riley Magnus and Blood Junky by Stavros. And somewhere along the line I must find time to read Dead Reckoning the latest in the Southern Vampire series by Charlaine Harris.

Links to Rebeka:
Vampires Revealed (home to my characters) http://vampiresrevealed.com/

Thank you for joining us today, Rebeka – it has been fun having a glimpse into your life.  We wish you much success with Vampires Revealed!
Posted by Unknown at 05:33