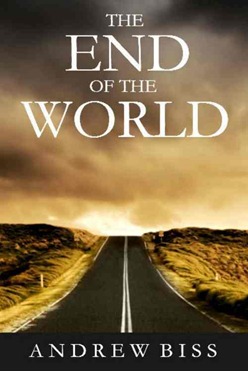 Today we meet Andrew Biss, author of The End of the World.

Here is the Goodreads blurb:
Accustomed to a life of cosseted seclusion at home with his parents, Valentine is suddenly faced with making his own way in the world. His new life is quickly upended, however, when he's mugged at gunpoint. Finding shelter at a mysterious inn run by the dour Mrs. Anna, he soon encounters a Bosnian woman with a hole where her stomach used to be, an American entrepreneur with a scheme to implant televisions into people's foreheads, and a Catholic priest who attempts to lure him down inside a kitchen sink. Then things start getting strange... An odd, yet oddly touching tale of life, death, and the space in-between.

Doesn’t that sound just too good to miss.  I can’t wait to start reading my copy – look out for my review!  But let’s get to know Andrew a bit better in the meantime.

Andrew, when did you start writing?
I came to writing a little later in life than some, and through playwriting. I'd always been a bit of a bookworm, but actually writing a book was something I never considered. I studied art and design at college and then went on to pursue an acting career - which I was never quite able to catch up with. Mostly on the stage but also a little film work (I’m in Francis Ford Coppola’s ‘Dracula’ for about two seconds!). When I lost the acting bug, I decided to try my hand at writing a play. I was immediately hooked, my plays started getting produced and winning awards, and I’ve been doing it ever since – more than a decade now. My recent segue into the realm of fiction writing is a new “chapter” in my writing journey, and one that I’m finding incredibly rewarding. It’s very different from playwriting, and in a way I’ve felt like I’ve been learning a new language.

Does your family support you in your writing?
I'm very fortunate to have a family that has always been supportive of me in whatever artistic direction I've followed. I know that some people aren't so lucky and I wish it wasn't so.

How long does it usually take you to write a book?
That's pretty hard to quantify as I have a full-time job, since I'm not able to support myself from my writing alone...yet. Along with all the other commitments and "life stuff" that we all have, it can make finding the time for writing quite a challenge. You just have to eek out every spare moment you have and make the most of it. I often wish life came with a "pause" button.

What inspired you to write this book?
Actually it was a number of things. I'd been reading up on Buddhism, just because I thought I ought to as I didn't really know much about it. It was then that I learned about the state of Bardo, from the Tibetan Book of the Dead - this strange and sometimes frightening plane between death and rebirth. Reading about that took my imagination hostage for quite a while. Simultaneously, I'd been toying with an idea for a story about a young man who was home schooled and completely shielded from the world by his parents, who was then suddenly thrown into the real world with no real knowledge of life other than what he'd learned in books, from his parents, or from the television. From that came The End of the World.

Who designed the cover?
I did. As I mentioned earlier, my background is in art and design, so that aspect of independent publishing - rather than a chore as it is for some - is something I enjoy.

Wow, you did  a great job – really love the cover!
What is your next project?
It's a book entitled "Schism" which I hope to have out in the next month or two. It's a darkly humorous, sometimes frightening, and ultimately tragic tale, and I would describe as a psychological thriller of a different breed. The main protagonist, Horatio Higgins, is, in my humble opinion, one of the most interesting and complex characters I've ever written. Advance warning, though: It's not for the squeamish.

What is the hardest thing about being an author?
Aside from the aforementioned issue of actually finding the time to write (in my case), I would have to say finding your audience. It's a great big world out there, with lots and lots of people who have very different tastes. Getting your books noticed from among the plethora of other books out there is a task in itself, but from there you have to find those that enjoy the kind of books that you write. Hard as it is sometimes, though, I wouldn't change it for the world. I love writing and I'm never happier than when someone has connected with something I've written.

Who are some of the authors that inspire you?
Perhaps an odd list, but here you go: Among others, W. Somerset Maugham, Joe Orton, Evelyn Waugh, Edward Albee, Graham Greene, Oscar Wilde, Jean Paul Sartre, Quentin Crisp, Stevie Smith, Kurt Vonnegut, and Jackie Collins. (Okay, maybe not the last one.)

You almost threw me with Jackie Collins – lol!!
What is in your own TBR pile?

Currently, The Miracle Inspector by Helen Smith, Vacation by Jeremy Shipp, and The Old Store by Peter Salisbury. 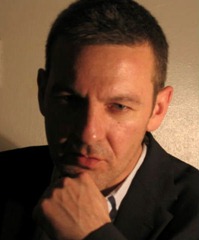 The works of award-winning author and playwright Andrew Biss have been produced in New York, London, Los Angeles, and many other cities across North America and Europe. His plays have won awards on both coasts of the U.S., critical acclaim in the U.K., and are an Off-Off-Broadway mainstay.

He is a graduate of the University of the Arts London, and a member of the Dramatists Guild of America, Inc.

I am so happy today as Andrew is giving one lucky commenter the opportunity to win a eCopy of The End of the World.  Yay.  Leave a comment for Andrew and I will draw the lucky number on
07 November 2011.

Thank you so much, Andrew.  It has been great fun talking to you and we wish you lots of success on the road ahead!

Email ThisBlogThis!Share to TwitterShare to FacebookShare to Pinterest
Labels: andrew biss, meet the writer, The End of the World