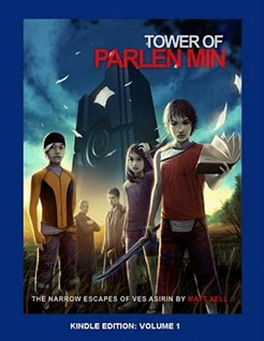 Goodreads blurb:
Ves Asirin, an orphaned and introverted boy with a complicated memory loss disorder, wins a trip to the Tower of Parlen Min, the home of the wealthiest inventor of the time, Jacobius Trent. There, with 19 other children, he must compete in the Sword Challenge; a series of intricate puzzles and daring tasks, for a prize of $12 million. As dazzling, glorious and liberating as the Tower seems to be for him, Ves finds that it keeps a dark and secret history that he has been unknowingly connected to for over 150 years, a secret that will define his future and destiny ... if he can escape The Shadow; a powerful and seemingly unstoppable, supernatural serial killer.

Let’s get to know Matt a little better.

When did you start writing, Matt?
I started writing, or at least taking it really seriously, when I was about 13. Most of the stuff I wrote were plots and scripts for comic books that my friends and I did. Back then I didn't know there was a proper format for scripting so I wrote in novel prose. So my earlier writings read like Japanese light novels.

Does your family support you in your writing?
With the exception of my bother, er ... no. I doubt they even know what a Matt Xell is. I live in a country where doing what I do commercially is extremely outlandish and almost unfathomable, so I like to keep it to myself and the few people that I trust.

How long does it usually take you to write a book?
It depends on the genre and subject matter of the book I'm writing. If we're talking about a popular genre like a paranormal romance or a dystopian fantasy novel, something like Twilight or Hunger Games, set up around a single theme and simple plot I'd say it would take me four to six months if I'm uninterrupted for a 60 - 70,000 word novel, because there's a lot inspiration and works to draw synthetic ideas from. But if we're talking about something original like a mystery/suspense thriller with lots of twists, well developed characters and complex themes with political, cultural, religious tones ... well something really realistic with a lesson to teach, I think it would take me about a 1 to 2 years with lots of research to do for a 100,000 to 150,000 novel, something like Dan Browns' Robert Langdon books (Da Vinci Code, Angels and Demons) or Stiegg Larson's Millennium trilogy (Girl with the Dragon Tattoo).

Tower of Parlen Min or a book like it, which is a 140,000 word mash-up of so many sub-genres, takes about 1 year to write, because it has a bit of both synthetic elements and well-imagined and thought out elements.

What would be able to distract you from your goal?
The greatest distraction to a lot of my goals is my attitude towards whatever I'm pursuing. Sure there a lot realistic obstacles and distractions such as money, the environment you're in, lack of support and such, but having a crappy attitude just doesn’t help things. Having a great attitude however helps you get through a lot of the obstacles that may arise in any project ... I wish I could follow my own advice - heh.

LoL – lots of us wish we could follow that advise, Matt!
What inspired you to write this book?
Tower of Parlen Min was inspired by a nightmare I had after watching the Charlie and the Chocolate Factory and House on Haunted Hill movies back in 2006. I later merged the original plot, then called The Tower of the Great Few, with another story I was working on called The Narrow Escapes of Benn Benns and spiced it up with the elements of the Sword Challenge.

What kind of research did you have to do?
A lot of the research had to do with Ves' memory and how it would work, creating and designing the world of Everlon where the story is set and the Sword Challenge. The Sword Challenge was most of the meat of this story and it was nightmare to pull off because each challenge had a theme, mystery and anecdote or story for the children to solve. So I read a lot of myths and folklore from all around the world, picking out the ones that would work best for my story.

Who designed cover?
The characters and the Tower were designed by my brother, The Red Plus, and it was illustrated and painted by the great Randis Albion. They did an awesome job depicting the overall theme of the book and I don't think anyone else could have done it better and I'm really grateful for it.

What is your next project?
Right now I'm still marketing Tower of Parlen Min and working on the plot for the second book in the Ves Asirin series which is titled Eclipse Over Atuwis Wood. I start writing it sometime in April 2012. But I'm also planning on releasing some light novels set in the world of Everlon before the second book is done, like Eslo's Story, The Hunt for Majis and The Brothers Macullen.

A typical day in your life would be?
2 hours of visualisation, meditation and self motivation + 9 hours of the day job + 3 hours of marketing TPM + 2 hours of entertainment, food, bathing etc + 7 to 8 hours of sleep

What is the hardest thing about being an author?
Creating and maintaining a platform of loyal readers of your work

Do you hear from your readers much? What do they say?
I'm hearing from a fair bit of them these days. Reader response is mixed to be honest; some think TPM is awesome, some think it's lame and some just can't get their heads around it. But I'll be the first to tell you that the book has a lot to take in and isn't for the casual reader :)

Who are some of the authors that inspire you?
J.K Rowling, Neil Gaiman, Joanna Penn, Amanda Hocking, Sebastien Japrisot and Stiegg Larson just to name a few.

What is in your own TBR pile?
Mmm, I know there's a lot of really good stuff out there but I really want to get my hands on the rest of Stiegg Larson's Millennium Trilogy; it's number one on my wishlist:)

Matt has been generous in giving away an eCopy of Tower of Parlen Min.  Leave a comment and I will draw 5 winners to receive a coupon for a free download.  Giveaway ends 17 October 2011.

Thank you so much for joining us today, Matt – we wish you lots of success with your writing!