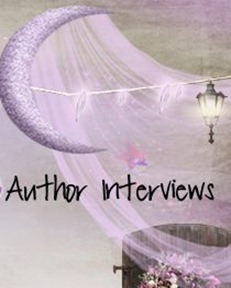 Today we meet a South African living in the US. 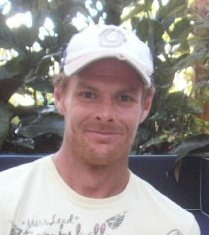 I'm 36.  Born in Addington Beach, Durban.  After high school worked for Standard Bank before moving to USA in 1997.  Occupation - horse trainer.  Traveled extensively across U.S.  Have lived in 12 different states including Colorado, Hawaii, Florida, California.  Currently live in Los Angeles, CA with my girlfriend and our 2 dogs Roxy and Dexter.

Let’s see what the blurb says about his book The Betrayals of Grim's Peak.

Augustus Tomlin is found floating face-down in the waters just off the Florida coast when he is just a year old. He spends most of his young life trying to overcome a paralyzing fear of water, and when his adoptive parents bring back to the Keys from his home state of Arizona at age fourteen, his life changes forever after a ferocious attack by several nightmarish creatures waiting for him in a cove, and a da 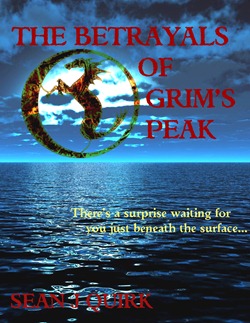 ring rescue by a girl riding a massive sea creature that resembles a dragon.
Not long after that Augie is introduced to the magical world of Grim's Peak where underwater lakes, trimsticks and wimballs, cryptoquariums, and water arches are the order of the day.
Augie is immersed in this new world and must make new friends, learn how to co-exist with the sometimes unfriendly plants, adverse underwater weather conditions, and amazing creatures like the hippocamp, which is a creature of legend said to be half-horse half-fish; all the while trying to figure out who his parents were; who is trying to kill him; and what his connection is to the town's founding fathers whose centuries old secrets threaten to throw the residents of this amazing world into complete chaos...

Sean, we want to get to know you better.  Will you answer a few questions?

When did you start writing?
I started writing in my early teens.  I read Dean Koontz's Lightning at 12 or 13 and by the time I finished it I knew I wanted to be a writer.

Oh I love Dean Koontz too.  :) How long does it usually take you to write a book?
It depends on the book.  Betrayals is my third and it took 7 or 8 months from conceptualization to completion.  The first draft was finished in about 3 months and I've been doing revisions since then.  I'd say it's been re-written 3 or 4 times on average, although certain sections demanded a bit more attention because for one thing it's a pretty complex story, and secondly, it's set in an entirely new world that had to be a believable one.

What inspired you to write this book?
One simple question: 'What's really going on at the bottom of the ocean?'  The Betrayals of Grim's Peak is my own fun interpretation.

What kind of research did you have to do?
Not a whole lot to be honest.  I had a lot more 'imagining' to do than research because I didn't really have a point of reference to fall back on.  No-one else (that I know of) has done a story quite like this one, and it's not easy writing a story about a place that exists only in your mind.

What is the hardest thing about being an author?
Staring at a blank page.  Simple as that.  It's an intimidating sight!  A full-length novel is an 80 000 word jigsaw puzzle and every piece needs to be in the right place for it to work.  I don't think there are very many people who are able to control the pacing, the character development, the context, and the language right off the bat.  I know I wasn't able to, but, I was very fortunate to have worked with Pat LoBrutto on my first novel, Catch (which I've recently released), and I can honestly say that I have no idea where the state of my writing would be had it not been for him.  Pat has worked with Stephen King, Walter Tevis, Eric van Lustbader; he's the current editor on the DUNE books, and he's won the prestigious World Fantasy Award for Editing.  He is master class, and I'd suggest to any aspiring writers out there to get a good editor.  I can't stress how important that is.

Will "The Betryals of Grim's Peak" be a series?
Yes.  Absolutely.  There are going to be 2 or 3 more books set in and around the world of Grim's Peak.  Possibly more.

What is your next project?
My next release will be Remedy which is a sister-novel to Catch.  It isn't a sequel so it wouldn't matter which one you read first.  It occurs over the same period of time and follows a mostly new cast of characters, however, if you've read Catch you will recognize a few names.  Keep in mind that Catch and Remedy are in a very different genre than Betrayals  -  they are sci-fi action thrillers, whereas Betrayals is a Young Adult novel.  I'm the kind of guy that loves the Harry Potter books and movies just as much as I love the Jason Bourne series.

Who are some of the authors that inspire you?
Dean Koontz.  Stephen King.  J.K Rowling.

Thank you for joining us today, Sean and we wish you lots of success on the road ahead!