Wishlist: After the Snow by SD Crockett 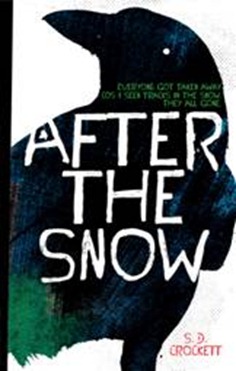 Blurb:
It is 2060 and the new ice age has brought with it fear, uncertainty and political disquiet. Society as we know it has begun to fall apart and outside interests have assumed control of amenities in the West.

Born after the snows, fifteen-year-old Willo lives with his family in the Welsh hills, until his family disappears without trace and Willo is forced to set out into the icy, barren landscape in search of them. Thus begins a journey of survival, betrayal, friendship and ultimately self-discovery. Willo’s is a voice that will stay with you long after you have turned the final page.

It would be easy to place this book in the dystopian genre, but Willo’s is a world not so very far-removed from our own. It is a future as plausible as it is disturbing, which will ignite lively debate amongst its readership.

AFTER THE SNOW was acquired by Macmillan Children’s Books in one of the most hotly contested YA auctions of 2010. Sophie Crockett is an astounding new voice, who will sit alongside Michelle Paver, Patrick Ness and David Almond.

ABOUT THE AUTHOR
Sophie Crockett was brought up on a yacht as her parents circumnavigated the globe. After graduating from London University’s Royal Holloway with a degree in Drama and Theatre Studies, she travelled to Russia as a timber buyer in the Caucasus Mountains. After the birth of her first son in 1996, she returned to the east coast of Suffolk, where she spent five years restoring a derelict Ancient Scheduled Monument – a Martello Tower on the mouth of the River Deben. Other jobs have included trainee car mechanic, landscape gardener and portrait painter. She speaks Russian and French and currently divides her time between the beech forests of the Montagne Noir of Southern France, and Notting Hill, and still travels to Armenia to buy timber. Her experiences in far-flung places inform much of her writing. Sophie is married to the artist Timothy Shepard and has two children.