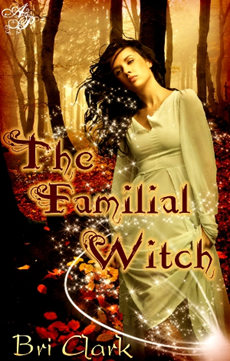 The Familial Witch
By Bri Clark

Blurb:
Lucien Lemione the clan leader of the feared and revered Eternals is faced with the ultimate betrayal. His second in command for two centuries has not only created the most grievous of offenses but also commissioned the creation of liquid silver. When poisoned by this toxin, an immortal suffers a fate much worse than death, frozen in an internal prison. After being wounded when found spying, he hides deep within the eerie woods that encircle the Triad Mountains. Desperate and in pain, he prays to an offended mother goddess for help. Her answer: a woman, but not just any woman. A witch.

After losing her entire coven at the hands of the Eternals, Aisleen is the last of her kind. She retreats from the world to Trinity Forest where she is giving the opportunity of a lifetime, or perhaps a test of principles. It’s there she discovers the man she heals is the Eternal that wiped out her people. Although she is bound as a healer, she could be creative in her revenge. Aisleen knows who and what Lucien his…but does not speak of it. There can be no future with Lucien for she can only be with a mortal man. Even if she wanted to be with him, can she forgive the man that caused the genocide of her people?

Lucien must act quickly for the survival of his clan is at stake. However, Aisleen’s ethereal beauty and emerald eyes keep pushing those thoughts far from his mind. Determined to find out what secret she hides, he prolongs his time with her. When his people need him most what will he choose…duty, desire, or will he make his own fate?

You can choose love but you can’t choose destiny. Bri Clark is a real example of redemption and renewal. Growing penniless in the South, Bri learned street smarts while caring for her brother in a broken home. She watched her mother work several jobs to care for their small family. Once her brother could fend for himself, Bri moved on to a series of bad choices including leaving school and living on her own.

Rebelliousness was a strong understatement to describe those formative years. As a teenager, her wakeup call came from a fight with brass knuckles and a judge that gave her a choice of shaping up or spending time in jail. She took that opportunity and found a way to moved up from the streets. She ended up co-owning an extremely successful construction business. She lived the high life until the real estate crash when she lost everything.

She moved west and found herself living with her husband and 4 kids in a 900 square foot apartment. She now fills her time, writing, blogging, leading a group of frugal shoppers and sharing her southern culture. Her unique background gives her writing a raw sensibility. She understands what it takes to overcome life’s obstacles. She often tells friends, “I can do poor. I’m good at poor. It’s prosperity that I’m not used to.”

Bri and her husband Chris live in Boise. Bri is known as the Belle of Boise for her true southern accent, bold demeanor and hospitable nature.

Bri boasts several positions in the publishing industry. An author, professional reviewer, blogger, and literary strategist she enjoys all aspects of her career from the creation of story to the branding and marketing needed to make her books successful.