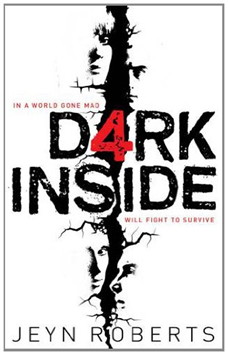 Goodreads blurb:
Four teenagers on the same road in a world gone mad. Struggling to survive, clinging on to love and meaning wherever it can be found. THE DARK INSIDE is a stunning, cinematic thriller: 28 DAYS LATER meets THE ROAD.

Since mankind began, civilizations have always fallen: the Romans, the Greeks, the Aztecs…. Now it’s our turn.

Huge earthquakes rock the world. Cities are destroyed. But something even worse is happening. An ancient evil has been unleashed, hooking on to weakness, turning the unwary into hunters, killers, crazies.

Mason: His mother is dying after a terrible car accident. As he endures a last vigil at her hospital bed, his school is bombed and razed to the ground. Everyone he knows is killed.

Aries: A school bus, an aftershock and a crash. Pulled out of the wreckage by a mysterious stranger, she’s about to discover a world changed forever.

Clementine: An emergency meeting at the town hall that descends into murderous chaos. Outside the rest of their community encircle with weapons. How can those you trust turn into savage strangers?

Michael: A brutal road rage incident. When the police arrive on the scene they gun down the guilty and turn on the by-standing crowd. Where do you go for justice when even the lawmakers have turned bad?

My thoughts:
I am a big fan of dystopian/zombie books and Dark Inside did not disappoint!  I took it along on a little mini holiday in December and when I starting reading, I found myself stealing moments where I could go sit in a corner and read.  I loved this book.

The story starts with an earthquake which unleashes all kinds of evil when life as we know it, ends.  Most people are turned by this evil and starts murdering people without any reason.  They are not really zombies – zombies can be identified immediately and are usually out to bite you :)  These “baggers” look very normal . . .  until they turn on you.

Dark Inside is told from the different points of view of our main characters which are all very likeable.  The mysterious Daniel who only occasionally drops in to save the day, was especially intriguing and I hope to see lots more of him in the second book.  This book ends with many loose ends and I kind of felt that it was just an introduction to where the real story is going to start.   I cannot wait for the second book in the series to be published.

Thank you to Kelly from PAN MacMillan South Africa!

Author Info:
Jeyn Roberts (pronounced Jen - the Y is silent)grew up in Saskatoon, Saskatchewan, and started writing at an early age, having her first story published when she was 16 in a middle-grade anthology called LET ME TELL YOU. 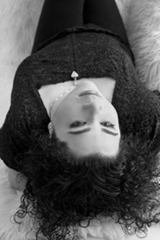 When she was 21, she moved to Vancouver with dreams of being a rock star, graduating from the University of British Columbia with a degree in Writing and Psychology. For the next few years she played in an alternative/punk band called Missing Mile before moving to England where she received her MA from the prestigious Creative Writing graduate course at Bath Spa University. Jeyn is a former singer, songwriter, actress, bicycle courier and tree planter.
An avid traveller, she’s been around the world, most recently, teaching high school in South Korea.
A lover of animals, Jeyn volunteers regularly with helping abandoned and abused animals, especially cats.