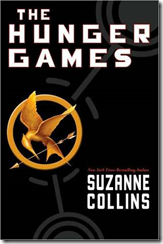 I have been hearing about The Hunger Games since I started blogging in 2009 but I never really read any reviews or gave it much thought.  That was until my Secret Santa bought me the book for Christmas.    And now that I have read it, I can’t believe I waited so long!  I want to read the rest of the series immediately.

This rollercoaster story centres around Katniss Everdee, a sixteen year old who lives alone with her mother and younger sister in District 12, on the outreaches of the Capital, a garish nation of Panem.  The Capital hosts a cruel tournament each year as punishment and as warning to the people of the districts for a failed revolution attempt.  This tournament, called The Hunger Games, forces one boy and one girl from every district to participate in a fight to the death on live TV. When Katniss’ baby sister, Pim, is chosen in the hated ceremony, Kat steps forward to take her place.

Katniss and the chosen boy from District 12, Peeta, are both likeable characters and the author made you care for them from the start.  I am not ashamed to admit that a few tears were shed towards the end of the book.  But I will also admit that I didn’t feel as much sympathy for Katniss  as I did for Peeta.  He always seemed genuinely honest and forthcoming while Katniss seemed to want to analyze every action or sentence spoken.  She was portrayed as a little too naïve and unsure of herself considering that she was fighting to the death.   But I guess she has two more books to grow.

I would recommend this fast paced story to all dystopian lovers.