Review: Passions of a Wicked Earl by Lorraine Heath 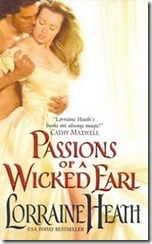 Goodreads blurb:
Known throughout London for his prowess in the bedroom, Morgan Lyons, the 8th Earl of Westcliffe, cannot forgive an unpardonable affront to his honour. Discovering his young bride in the arms of his brother was a staggering blow–so he banished the beautiful deceiver to the country and devoted himself to the pursuit of carnal pleasure.
Claire Lyons was an innocent, frightened girl on her wedding day, seeking chaste comfort from a childhood friend. Now, years later, she has blossomed magnificently and has returned to London with one goal in mind: the seduction of her notorious husband. Unskilled in the sensual arts, she burns nonetheless for the kisses too long denied her. And she has but one Season to win back the heart of the rogue she betrayed.

I really love historical romances – Victorian times were such a softer, gentler time.  But it was not necessarily easier for Claire.  I understand that she did a terrible (although innocent) thing to Westcliffe but I also felt that she was treated unfairly for quite a portion of the book.  She is a totally selfless character, putting aside her own feelings and fears so that her sister can have a “coming out season”.  I did not really enjoy her sister Beth’s character and felt that life was just too easy for her.

I absolutely love tortured heroes and Westcliffe fits this part perfectly.  From the first pages when he thinks that he is one of the few people that does not feel . . . no love, no passion, no anger, not anything.  That soon chances when Claire arrives on his doorstep and he is reminded of all the feelings he had for her since they were children.

I also enjoyed the interaction between the three brothers (the second book of the trilogy will star Stephen, the brother who betrayed Westcliffe).

The climax at the end of the book was a little too much for my liking and everything was just too neatly sorted out in just a few minutes.

But this was an enjoyable read and lovers of Body Rippers will not be disappointed.

I received this book for review from the publisher.  The opinions expressed are my own and I wasn't influenced in any way.  This review was also added to GOODREADS, BOOK BLOGS and AMAZON.com.