On my wishlist #1 (recovered) 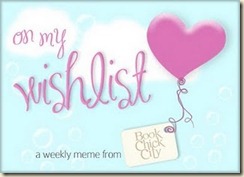 On My Wishlist is a fun weekly event hosted by Book Chick City and runs every Saturday. It's where you can list all the books you desperately want but haven't actually bought yet. They can be old, new or forthcoming. It's also an event that you can join in with too - Mr Linky is always at the ready on Carolyn’s blog.  This is the book I am wishing for. 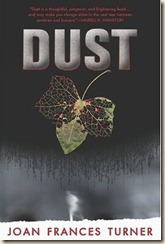 Dust by Joan Frances Turner
Nine years ago, Jessie had a family. Now, she has a gang.
Nine years ago, Jessie was a vegetarian. Now, she eats very fresh meat.
Nine years ago, Jessie was in a car crash and died. Nine years ago, Jessie was human.
Now, she’s not.
After she was buried, Jessie awoke and tore through the earth to arise, reborn, as a zombie. Jessie’s gang is the Fly-by-Nights. She loves the ancient, skeletal Florian and his memories of time gone by. She’s in love with Joe, a maggot-infested corpse. They fight, hunt, dance together as one—something humans can never understand. There are dark places humans have learned to avoid, lest they run into the zombie gangs.
But now, Jessie and the Fly-by-Nights have seen new creatures in the woods—things not human and not zombie. A strange new illness has flamed up out of nowhere, causing the undeads to become more alive and the living to exist on the brink of death. As bits and pieces of the truth fall around Jessie, like the flesh off her bones, she’ll have to choose between looking away or staring down the madness—and hanging onto everything she has come to know as life…
Posted by Unknown at 21:47