Book Review: I had the right to remain silent, but I didn’t have the ability by Ron White 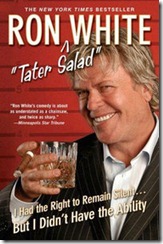 Title:  I had the right to remain silent, but I didn’t have the ability
Author: Ron White
Genre: Stand up comedy
Publication date:  06 June 2006

Goodreads blurb:
Following Jeff Foxworthy and Larry the Cable Guy from the Blue Collar Comedy Tour to the page, Ron White (affectionately known as “Tater Salad”) delivers the laughs in his distinctive and beloved down-home style.
Fans of Ron White's “perfectly-phrased everyman gripes and raunchy, grinning asides*” will find much to appreciate here. He riffs on everything from obnoxious designer sunglass salesmen to his wife's wealthy but stingy family, and he revisits some of his most famous characters, such as his troublesome dog Sluggo (“He ran away all day. He was gone for ten hours. So, to punish him, when he came home I took him for a walk.”).

Best of all, White's hilarious material is accompanied here by clever artistic interpretations, courtesy of illustrator Matthew Schulz. BACKCOVER: “Ron White's comedy is about as understated as a chainsaw, and twice as sharp.”

My thoughts:
I have listened to the Blue Collar Comedy Tour on audio and absolutely loved it, so I couldn’t wait to get this book by Ron White.  Unfortunately it is almost word-for-word his sketch from his stand up routine in that show.  If you haven’t seen (it is on DVD too) or heard it, it is a must – hilarious.  Get it now!  But if you have, this is not the book for you.