In my Mailbox #1 (recovered) 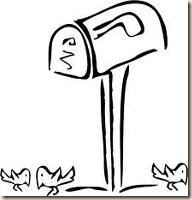 I have seen this meme around for a bit but since I have never won anything or are not in a position to receive any ARC paperbacks, I have never participated.  But my Inbox is also a mailbox, right?  So here I am joining In My Mailbox, hosted by Kristi over at The Story Siren every Sunday.
In My Mailbox is a weekly meme that lets everyone see what books you have received or bought that week.
Out of time by Monique Martin (received from author for review)
When a mysterious accident sends Professor Simon Cross and his assistant, Elizabeth West, back in time to 1920s New York, they find it's more than a the world of Prohibition and speakeasies. It's a world where the underground is run by the underworld, and where vampires and mobsters vie for power in the seedy underbelly of Jazz Age Manhattan. As a professor of the occult, Simon's life was a ritual of research and stoic solitude until he met Elizabeth West. A gambler's daughter, Elizabeth knows a bluff when she sees one. Behind Simon's icy glares and nearly impenetrable armor beats the heart of a man in desperate need of love. Simon spent his life searching for vampires and now that he's found one, it just might take from him the only woman he's ever loved. Together they fight demons real and imagined, as trials of murder, intrigue and danger push Simon and Elizabeth together and pull them apart. Out of Time is an award-winning story of love and redemption. That is what I received.  What about you?
Posted by Unknown at 21:54

Email ThisBlogThis!Share to TwitterShare to FacebookShare to Pinterest
Labels: in my mailbox, meme