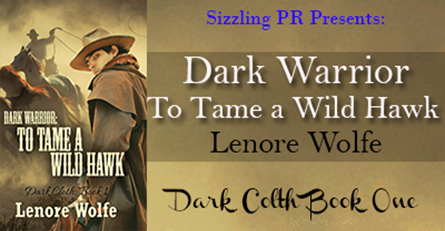 Today the Sizzling PR Tour stops here at All the days of and I am delighted to have a guest blog by Lenore.  Later on in the post you will also find details of To Tame a Wild Hawk, so don’t forget to read till the end :)

Love and gunfighters. The vision of the old Wild West. Americans love the romance of the great Wild West. I began reading historical romance at a young age. I loved history. I loved imagining what old houses, old furniture, old items would tell me--if only they could tell me their story. My father was an old mountain man who grew up around the old-time cowboys of Montana. These were old cowboys who were alive during a time, and witnessed, when cars and and barbed wire fences took over. I also grew up listening to the stories my great-grandmother used to tell. Montana was still wild when my father was a child--and still had family feuds when I was a child. So I grew up with these old stories, the reality of the old Wild West--but also the romance. I love the complexities and heart-breaking nuances of what was real about it. But I also love the romance of it.

Come take a journey with Hawk into the Wild West with my first novel, Dark Warrior: To Tame a Wild Hawk. Meet a six year old boy who witnesses his father and renegade friends kill every single one of their friends on the wagon train with whom they were traveling west. Follow the boy on a journey, set in motion that day, as he meets his destiny when a Cheyenne warrior finds him and adopts him into their clan. And get a glimpse of that destiny through the warrior's eyes, when he witnesses the way the boy looks out across the prairie grasslands at his dead friends littering the ground whose sightless eyes stare up into the deep blue sky, and knows--the boy would not rest--until his friends no longer cried out to him in his sleep.

That was the day Hawk was born--and a boy learns the meaning of an anger that burns deep within--in a place that knows no rest.

Then follow Hawk on his journey as it takes him to the wild and untamed town of Cheyenne, Wyoming where he meets Mandy--and he learns how she has been fighting a battle of her own with a cattle baron who has murdered her father. But when Hawk gets shot, and she becomes his nurse, the two of them learn what they share in common--and what secret they share--that will tear them apart.

To Tame a Wild Hawk 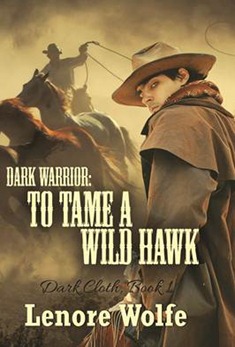 Amanda Kane has always had visions of the man she's destined to marry—a cowboy who will help her save her ranch. But Hawk is no ordinary cowboy. He carries a powerful secret. A secret that leads to betrayal. She spent years with a secret society of Lakota women, who taught her the ancient ways. Now, she must seek the Grandmothers, from beyond the veil, if they are stop a man behind a mask.

Amanda Kane has spent years with a secret society of Lakota women, who taught her the ancient ways. She has sought the help of the Grandmothers, from beyond the veil, to help her stop the man behind the mask. They point her to the visions she has always had of the man she’s destined to marry—a cowboy who will help save her ranch. But Hawk is no ordinary cowboy. He carries a powerful secret. A secret that leads to betrayal.

Lenore writes dark fantasy, paranormal romance, fantasy, historical romance. She grew up in Montana and Alaska, and currently lives in the central US. She holds a BA in Sociology from the University of Northern Colorado, with a minor in writing and is a student of the Shaman path.