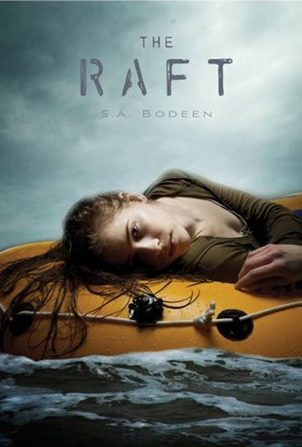 Goodreads blurb:
Robie is an experienced traveller. She’s taken the flight from Honolulu to the Midway Atoll, a group of Pacific islands where her parents live, many times. When she has to get to Midway in a hurry after a visit with her aunt in Hawaii, she gets on the next cargo flight at the last minute. She knows the pilot, but on this flight, there’s a new co-pilot named Max. All systems are go until a storm hits during the flight. The only passenger, Robie doesn’t panic until the engine suddenly cuts out and Max shouts at her to put on a life jacket. They are over miles of Pacific Ocean. She sees Max struggle with a raft.
And then . . . she’s in the water. Fighting for her life. Max pulls her onto the raft, and that’s when the real terror begins. They have no water. Their only food is a bag of Skittles. There are sharks. There is an island. But there’s no sign of help on the way.

My thoughts:
I have to admit that I don’t think I will be able to survive a plane crash and then two weeks surviving on a raft  - not to mention the deserted island.  I am not that strong or that resourceful but then neither was Robie.  I have no idea how she survived this ordeal.  She really did not do much except moan and feel sorry for herself for most of the book.

Just to illustrate my point, she is drifting in the middle of the ocean but complains about an infected nose-ring.  Really?!  Maybe it helped to keep her mind off the dire circumstances.  :)

Max, the co-pilot is the only other main character in the book.  He forces Robie out of the sinking plane and into the raft but soon loses consciousness.  For the rest of the book, Robie talks to Max and asks him questions without much response – I am sure his presence is a big part of her survival.

The ending was a real surprise to me.  All of a sudden a ship appears on the horizon and picks up Robie.  All is well and she is on her way to her mom and dad.  It was just too smooth for me.  I kept on waiting for the rescue to be a  “it is all a dream/hallucination” type of  climax but that never happened.

All in all, The Raft is an enjoyable read and I would recommend it for a lazy afternoon.