As I am still not able to read, I thought I would participate in a few more memes this week.  I found this one today and am jumping right in. (A GREAT BIG THANK YOU to hubby for linking up my laptop to a humongous screen so I can see – love ya sweety!) 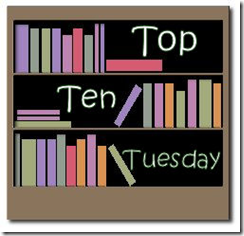 Top Ten Tuesday is an original feature/weekly meme created at The Broke and the Bookish. This meme was created because we are particularly fond of lists here at The Broke and the Bookish. We'd love to share our lists with other bookish folks and would LOVE to see your top ten lists!
Each week we will post a new Top Ten list complete with one of our bloggers’ answers. Everyone is welcome to join. All we ask is that you link back to The Broke and the Bookish on your own Top Ten Tuesday post AND post a comment on our post with a link to your Top Ten Tuesday post to share with us and all those who are participating. If you don't have a blog, just post your answers as a comment. If you can't come up with ten, don't worry about it---post as many as you can!
This week the top 10 is for the most anticipated reads in 2011.
Here is my list (in no particular order).
1. Hereafter 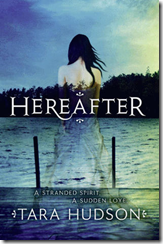 Drifting in the dark waters of a mysterious river, the only thing Amelia knows for sure is that she's dead. With no recollection ofher past life - or her actual death - she's trapped alone in a nightmarish existense. All of this changes when she tries to rescue a boy, Joshua, from drowing in her river. As a ghost, she can do nothing but will him to live. Yet in an unforgettable moment of connection she helps him survive.
Amelia and Joshua grow evern closer as they begin to uncover the strange circumstances of her death and the secrets of the dark river that held her captive for so long. But even while they struggle to keep their bond hidden from the living world, a frightening spirit is doing everything in his power to destroy their newfound happiness and drag Amelia back into the ghost world...forever.
2.  Kiss of Snow (Psy/Changeling) New York Times bestselling author Nalini Singh's exhilarating world of shapeshifters and psychics is "paranormal romance at its best" (Publishers Weekly). Now comes the story of an alpha wolf named Hawke used to getting exactly what he wants--and of the only woman who dares tangle with him.
Since the moment of her defection from the PsyNet and into the SnowDancer wolf pack, Sienna Lauren has had one weakness. Hawke. Alpha and dangerous, he compels her to madness.
Hawke is used to walking alone, having lost the woman who would've been his mate long ago. But Sienna fascinates the primal heart of him, even as he tells himself she is far too young to handle the wild fury of the wolf.
Then Sienna changes the rules and suddenly, there is no more distance, only the most intimate of battles between two people who were never meant to meet. Yet as they strip away each other's secrets in a storm of raw emotion, they must also ready themselves for a far more vicious fight…
A deadly enemy is out to destroy SnowDancer, striking at everything they hold dear, but it is Sienna's darkest secret that may yet savage the pack that is her home…and the alpha who is its heartbeat…
3.  A Brush of Darkness 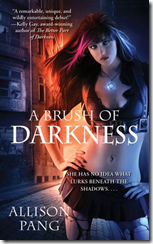 The man of her dreams might be the cause of her nightmares.
Six months ago, Abby Sinclair was struggling to pick up the pieces of her shattered life. Now, she has an enchanted iPod, a miniature unicorn living in her underwear drawer, and a magical marketplace to manage. But despite her growing knowledge of the OtherWorld, Abby isn’t at all prepared for Brystion, the dark, mysterious, and sexy-as- sin incubus searching for his sister, convinced Abby has the key to the succubus’s whereabouts. Abby has enough problems without having this seductive shape-shifter literally invade her dreams to get information. But when her Faery boss and some of her friends vanish, as well, Abby and Brystion must form an uneasy alliance. As she is sucked deeper and deeper into this perilous world of faeries, angels, and daemons, Abby realizes her life is in as much danger as her heart—and there’s no one she can trust to save her.
4.  Across the Universe 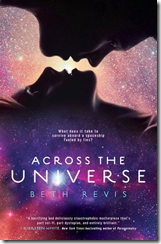 Seventeen-year-old Amy joins her parents as frozen cargo aboard the vast spaceship Godspeed and expects to awaken on a new planet, three hundred years in the future. Never could she have known that her frozen slumber would come to an end fifty years too soon and that she would be thrust into the brave new world of a spaceship that lives by its own rules.
Amy quickly realizes that her awakening was no mere computer malfunction. Someone--one of the few thousand inhabitants of the spaceship--tried to kill her. And if Amy doesn't do something soon, her parents will be next.
Now Amy must race to unlock Godspeed's hidden secrets. But out of her list of murder suspects, there's only one who matters: Elder, the future leader of the ship and the love she could never have seen coming.
5.  Wither (The Chemical Garden Trilogy) What if you knew exactly when you would die?
Thanks to modern science, every human being has become a ticking genetic time bomb—males only live to age twenty-five, and females only live to age twenty. In this bleak landscape, young girls are kidnapped and forced into polygamous marriages to keep the population from dying out.
When sixteen-year-old Rhine Ellery is taken by the Gatherers to become a bride, she enters a world of wealth and privilege. Despite her husband Linden's genuine love for her, and a tenuous trust among her sister wives, Rhine has one purpose: to escape—to find her twin brother and go home.
But Rhine has more to contend with than losing her freedom. Linden's eccentric father is bent on finding an antidote to the genetic virus that is getting closer to taking his son, even if it means collecting corpses in order to test his experiments. With the help of Gabriel, a servant Rhine is growing dangerously attracted to, Rhine attempts to break free, in the limted time she has left.
6.  Born at Midnight 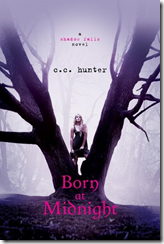 Kylie Galen has had a lot of crap tossed in her lap. Her parents are getting a divorce. Her boyfriend broke up with her because she wouldn’t put out. Her grandmother died and now Kylie’s acquired a stalker. Unfortunately, she’s the only one who seems to be able to see the stalker. And that gets her sent to a psychologist’s sofa.
The kooky psychologist gets Kylie sent to Shadow Falls Camp. Kylie and her parents think it’s a camp for troubled teens.
They thought wrong.
It’s a camp of supernaturals: vampires, werewolves, fairies, witches and shape shifters. And if she believes the camp leader, Kylie is one of them, too.
Just because she’s seeing ghosts, just because she was born at midnight, does that really mean she’s not human? And if so, what is she? Not even the other supernaturals can tell her.
As Kylie attempts to cope with the realization that these creatures actually exist, and that she might even be one of them, the ever present stalker/ghost appears to have secrets that could unravel the mystery of Kylie’s identity and her destiny.
But getting a ghost to open up is as hard as getting a guy to talk about his feelings.
As Kylie struggles to find answers, two hot guys, a werewolf and a half-fairy vie for her attention. However, Kylie’s determined that before she lets her heart discover a new love, she needs to solve her indentify crisis and unearth the truth of her destiny.
What 2011 books am I missing?  Let me know.

Email ThisBlogThis!Share to TwitterShare to FacebookShare to Pinterest
Labels: Top 10