Lets jump right into this week’s books.  Firstly I found this one. 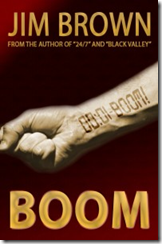 Boom by Jim Brown
A young woman darts into a Los Angeles hospital emergency room screaming for help. The cause of her concern is a three inch tattoo on her left arm that reads: 00:01- BOOM!
She doesn’t know how, when, or where she got it. But she swears it’s . . . changing.
“When I woke up this morning it said ten hours,” she tells the ER nurse. “But later when I looked it said five hours and twenty-three minutes. So I started watching it – real close like – and I saw it wiggle and change. Oh God. I think it’s counting down.”
Anne Thayer is a relatively new nurse but dedicated to her craft. And even though the patient is clearly a meth-head Anne does her very best to assuage the girls obvious delusions until – the nurse sees it too. A three inch tattoo moving, rearranging to read: 00:00 – BOOM!
Click here to go to Jim’s website and don’t forget to watch his little VLOG – too funny!

And now something for Christmas :) 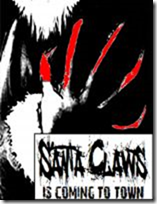 Santa Claws is coming to town by Calvin A.L. Miller II
An undead Santa that needs elves has only one way to get 'em... In person. Jimmy Paugh started his day for all the wrong reasons and may end up becoming a monster himself. He has been a baaaaad boy, and he's next on Santa Claws' list...