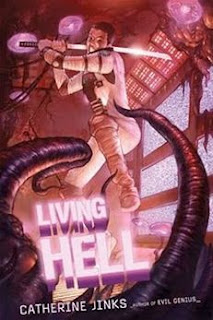 Title: Living Hell
Author: Catherine Jinks
Genre: YA Science Fiction
Publisher: Houghton Mifflin Harcourt
Publication date: 12 April 2010
Blurb:
What happens when a single moment changes everything? For seventeen-year-old Cheney, life on earth exists only in history books. The life he and over one thousand other people know is aboard the Plexus spacecraft: self-contained, systematic, and serene. But that was before the radiation wave.
Now Plexus has suddenly turned on them, becoming a terrifying and unrecognizable force. As the crew dwindles under attack, Cheney and his friends need to fight back before the ship that’s nurtured them for so long becomes responsible for their destruction.


My thoughts: (warning - small spoiler alert)
I really enjoyed this younger YA book.  It is written with a younger audience in mind but I also enjoyed the feel of the story.  It wasn't too complicated and the end result of the conflict was straight forward and satisfying (although a bit quick).

Our story centers around Cheney and the rest of the 1,000 crew who depend on Plexus for their daily survival.  If you love the technical know-how, you will love the descriptions of the micro organisms in almost all parts of the haul of the ship.  Ms Jinks has a wonderful imagination and I really enjoyed all the futuristic aspects that she brought to the pages.

Plexus is the only hope of survival for planet Earth.  We are never clear if earth is already beyond saving or if we are in search for another potential home.  What we do know, is that they have been searching for generations as Cheney and his friends were all born aboard the Plexus.

When a red alert sounds an approaching radiation cloud, the crew's calm and tranquil (and a little boring according to Cheney's friends) existence come to an end.  (spoiler alert) The ship suddenly transforms into a living, breathing entity trying to get rid of the foreign infection cells (read crew here).


From here on, it is a roller coaster ride of action and suspense while Cheney and the little band of children he finds himself leading, try to survive.  They are searching for his parents and other members of the crew after they get separated earlier in the story.  The conclusion was a bit easy but I understand that it is aimed at a younger audience.

I really enjoyed that there is a little epilogue at the end - it is nice to know how the story might have gone further.


I would recommend this book for a light and entertaining sci-fi read for the young-at-heart.

I received this book for review from the publisher.  The opinions expressed are my own and I wasn't influenced in any way.

This review was also added to GOODREADS, BOOK BLOGS and AMAZON.com.