Book Tour: The Queen and the Courtesan by Freda Lightfoot 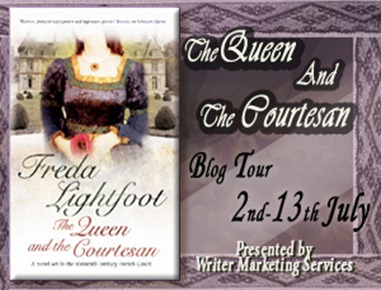 Here is Freda’s guest blog post to give us a little insight into the French Court.

The Secret Purpose of Masques at the French Court. 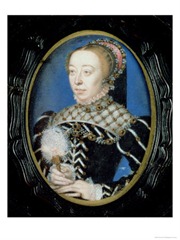 France from her native Italy, along with works by the Italian dancing masters. Her festivals and tournaments were famously lavish and spectacular entertainments. She spared no expense and employed the finest artists, musicians, choreographers and skilled craftsmen to create the necessary dramas and effects. A highly talented and artistic woman, she took a major role in planning and devising the most elaborate festivities, which she liked to call her ‘magnificences’.

A masque was a tableau or pageant in which the courtiers, often in some form of disguise or costume, would dance and perform. It could be anything from a simple ceremony or procession with torchbearers, to an elaborately staged classical story or mythological fable. They took place at Christmas, Easter and other festivals, would celebrate a wedding, christening or betrothal, or welcome visiting guests to the French court. They might include ballet or other dances, dramatic tales and songs, and even offer gifts to the spectators, often followed by a masked ball. These sumptuous court rituals sometimes incorporated martial sports and tournaments, which Catherine used as a means of allowing her feuding nobles to express their grievances with each other without reverting to open warfare, thereby maintaining her own power over them.

As queen mother of three sons who became King of France, Catherine used her entertainments to dazzle and impress visiting delegates and political leaders, the more fantastic and extravagant the better. At Bayonne she organised a water festival to take place on the river with an artificial whale leaking red wine from a supposed wound, and King Neptune riding his chariot pulled by sea horses. This was her way of showing the strength and riches of France, her adopted country. Her ‘magnificences’ certainly cost an inordinate sum to stage, but Catherine, being the wily operator she was, always had a political purpose behind them. Once her distinguished visitor had been sumptuously entertained, as with the Duke of Alva in Bayonne in ‘Hostage Queen’, the first of my Marguerite de Valois trilogy, she then embarked upon political discussions which, in this case, proved to have dire consequences. 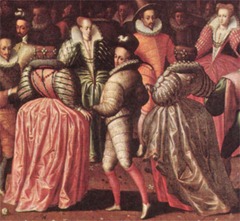 Masques also provided an opportunity for a young lady to show herself off to advantage. Gabrielle d’Estrées in ‘Reluctant Queen’, second in the trilogy, chose the prettiest, most lively ladies of the court to take part in the ballet. She herself, splendidly attired as a queen in cloth of silver and ice blue satin, led the dance and was hailed la belle des belles.

Flirting and dalliance was very much a part of the scene, of which Henry of Navarre, later Henry IV of France, was an expert. The nymph-like figures would often be scantily dressed. In ‘The Queen and the Courtesan’, last in the trilogy, on seeing the King watching her, pretty little Charlotte tossed back her blonde tresses and pirouetted gracefully across the room, then lifting her bow aimed the arrow at the King’s breast. She struck his heart not with the arrow but with love, which was not good news for his official mistress, Henriette d’Entragues.

Henriette, or Madame la Marquise as she was known, has her hopes set on a crown, but is devastated when she hears that Henry IV is considering marriage to the Italian princess, Marie de Medici. The masque, with all its busy hubbub and noise, was an excellent place to involve herself in a little subtle intrigue on how best to rid herself of this rival. But whether it will gain Henriette what she most desires, or lead her into mortal danger is a risk she is willing to take. 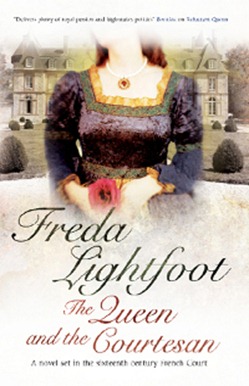 Blurb:
Henriette d'Entragues isn't satisfied with simply being the mistress of Henry IV of France; she wants a crown, too. Despite his promises to marry her, the King is obliged by political necessity to ally himself with a rich Italian princess. But Henriette isn't one for giving up easily.

Even as she let him peel off her silk stockings and pleasure her beneath her skirts, her mind was busily devising how to dispose of the Italian threat. Assistance soon came in the shape of Charles Emmanuel, Duke of Savoy, a son-in-law and ally of Philip II of Spain. He arrived at Fontainebleau on the fourteenth of December with an entourage of his most important ministers and nobles, and twelve hundred horse. Henriette took a dislike to him on sight.

‘What a strange little man he is,’ she whispered to her brother as the court gathered in the cold courtyard to receive him. ‘Like an ugly dwarf with that humpback, and over-large head with its abnormally broad brow.’

‘Hold your waspish tongue, sister. He is a powerful man, and whatever his deficiencies, rumour has it that he has enjoyed as many mistresses in his time as Henry of Navarre, and consequently acquired as many children.’

‘Poor souls,’ Henriette giggled. ‘I trust they do not resemble their father. His head looks like a brush with that great tuft of bristled hair atop it.’

‘Be nice to him,’ Auvergne warned. ‘He could be important to us. He bears many grudges against both France and the King. Apart from ongoing disputes about land, he had hoped to marry one of his daughters to Gabrielle’s son, little César, whom, had she lived, would have become the next Dauphin. Now that alliance has been lost, which he sorely regrets.’

Henriette considered this tidbit of gossip with eager interest. ‘You think he might help us then?’

‘It would not be in his interests for the Italian alliance to go ahead as the huge dowry offered might well be deployed by France to start a war against himself. Much of the territory he once captured from the French in the religious wars has now been restored, save for the Marquisate of Saluzzo. We, of course, regard that piece as of great strategic importance to our nation, being situated as it is on the Italian side of the Alps, but he resolutely refuses to surrender it. So guard that virulent wit of yours, sister, and practice more charm.’

The Duke was given a warm welcome by the King, and made much of with endless balls, jousts, masques and hunting-parties. After a week of this the court moved to Paris where the festivities, many devised by Madame la Marquise herself, continued over Christmas and into the New Year of 1600. Henriette was striving to be agreeable, and to please Henry, which was in her own best interests, after all. She even allowed the Duke to lead her out in a dance, although she returned to her brother’s side with a sardonic curl to her lip.

‘I do not care for that odious little man. Small of stature, large in ego.’

‘Remember what I told you. Ah, he is coming for you again, now put on your best smile and be gracious.’

The Queen and the Courtesan, published 29 June, can be found as a paperback or ebook here:

Most of my titles are now available as ebooks on Amazon, Kobo, Smashwords etc. Links to them can be found on my website:

Born in Lancashire, Freda has been a teacher, bookseller and, in a mad moment, a smallholder on the freezing fells of the English Lake District where she attempted to live the ‘good life’. She has now given up her thermals to live in an olive grove in Spain, where she produces her own olive oil and sits in the sun. She began her writing career by publishing over 50 short stories and articles, and has published 39 novels including many bestselling family sagas and historical novels.