Book Tour: The Bridge of Deaths by M.C.V. Egan 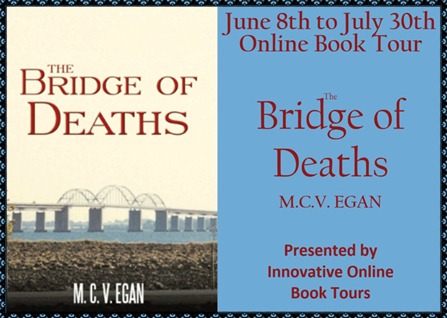 On August 15th, 1939 an English passenger plane from British Airways Ltd. Crashed in Danish waters between the towns of Nykobing/Falster and Vordingborg. There were five casualties reported and one survivor. Just two weeks before Hitler invaded Poland with the world at the brink of war the manner in which this incident was investigated left much open to doubt. The jurisdiction battle between the two towns and the newly formed Danish secret police, created an atmosphere of intrigue and distrust.
In the winter of 2009-2010 a young executive, Bill is promoted and transferred to London for a major International firm. He has struggled for the better part of his life with nightmares and phobias, which only seem to worsen in London. As he seeks the help of a therapist he accepts that his issues may well be related to a 'past-life trauma'.
Through love, curiosity, archives and the information superhighway of the 21st century Bill travels through knowledge and time to uncover the story of the 1939 plane crash.
The Bridge of Deaths is a love story and a mystery. Fictional characters travel through the world of past life regressions and information acquired from psychics as well as archives and historical sources to solve "One of those mysteries that never get solved" is based on true events and real people, it is the culmination of 18 years of sifting through sources in Denmark, England and the United States, it finds a way to help the reader feel that he /she is also sifting through data and forming their own conclusions.
The journey takes the reader to well known and little known events leading up to the Second World War, both in Europe and America. The journey also takes the reader to the possibility of finding oneself in this lifetime by exploring past lives.

M.C.V. Egan lives in South Florida with her husband and teenage son. She is fluent in four languages; English,Spanish,French and Swedish. From a young age became determined to solve the 'mystery' of her grandfather's death, she has researched this story for almost two decades. The story has taken her to Denmark, England and unconventional world of past lives and psychics.

He perceived himself to be a sensible man. He

surrounded himself with facts and numbers.

Those who worked and interacted with him saw

him as a levelheaded, reasonable, and credible

individual. He was a man of logic and common

sense. And aside from a handful of therapists,

no one knew him, not wholly.

At this point in time, he had exhausted all

to try to solve his problem. He now found himself

open to the possibility of the unreasonable,

illogical. It could even be said that he was

now open to the possibility of the absurd and

He functioned and lived well enough. To

be sure, he functioned and lived better than

most. And until now, this had been acceptable,

a reasonable way of living. But now this was

no longer the case, and at least in part, this

was due to his age. He was now past the age of

thirty, and he began to have a strong desire for

a family of his own. The stress of such desires

could also be a contributing factor that was

His logical mind made him fully aware of one

thing, and that was the type of woman he wanted

to share his life with: the type of woman he

pictured himself riding off into the happily

ever-after proverbial sunset with was not going

to settle for “enough.” It is also probably

important to note here that although he did not

realize it, he was by all accounts a hopeless

Now that he was an accomplished success in

his chosen field and in a financially stable

situation, he felt a need to fulfill other aspects

of his life. As was mentioned before, like so

many men past the age of thirty, he sought to

find a perfect woman, a woman to share his life

with. It was not a particular physical type he

imagined, for he found (as most men do) all pretty

the perfect woman was more along the lines of

an educational and socioeconomic nature. And,

of course, he required that she have mental

His problems seemed, as so many things in

life, not to be fair. Fortunately, he was not

one to wallow in self-pity. He knew that enough

effort and resources had been spent on various

traditional medicines and therapies to try to

solve his problem. He had also indulged in the

escapism cure, as some do in youth. None of

the aforementioned had worked, not in the long

He had originally sought hypnosis to learn

relaxation and control techniques. The first

hypnosis session taught him how to apply

relaxation techniques. In that session he

learned that while under hypnosis he was always

ultimately in control. He quickly learned that

he could choose to stop the session at any time.

He could do this by simply opening his eyes.

The second session was quite a different

story; it brought back his worst nightmare with

such clarity that he had a strong physical

reaction. He started moving his arms and legs

in such a way that he unfortunately somehow hit

the psychologist and gave the poor man a rather

before he tasted the salty water of the sea,

cold salty water, and saw the bridge (that part

was always in his nightmare).

With an icepack held to his face, the

therapist warned him that a certain door to

his subconscious had been opened and that he

he had in the past. He could not imagine his

dream to feel any more real than it already

did. The therapist also stated that a problem

having lasted seventeen years could hardly be

Inasmuch as he accepted that the therapy

might work, he had begun to develop a level

of distrust of his doctor. Frankly, he had

developed a strong dislike for the therapist

and felt that the man made him feel inferior.

The doctor was pushing, trying to take him to

places in his mind that he was not ready to

visit. And with regard to what he saw in his

dreams, the therapist had discussed certain …

his problems. These beliefs were such that most

in a world of facts and numbers would find hard

He did realize that his first trip to Europe

as a teenager with his school had been the

beginning of his unpleasant dreams. The therapist

called that the trigger. The problem began with

nightmares, but those had grown into other

problems. Aside from the trigger, the doctor

also spoke of layers of trauma acquired after

the trigger. These problems had created certain

obstacles in his life.

At first, the transfer to London had been

a feather in his cap, a desired jump in the

ladder to reach his career goals. As the weeks

passed and he began to feel more and more

uncomfortable, he began to pinpoint that it

had not been puberty, but rather the eighth

grade trip to Europe (the trigger) when it all

began. Here in London he felt this “problem”

was interrupting the way he liked to function

in his life and in his work.

This trigger, according to the therapist—the

therapist he did not like—bridged who he had

been(in a past life) with who he now was. This

principle of past lives was not a tangible idea

that he could relate to. If he needed to believe

in reincarnation at all, he needed facts that

made it seem plausible.

The dreams continued to haunt him. They

started out in different ways but always ended

the same … the same lettering on the wings and

on the side of the aircraft; the taste of salty,

cold water in his mouth; the anxious feeling of

loneliness and apprehension; and, these days,

the inevitability of awakening to a wet bed and

the frustrating and unpleasant feeling that he

had no control over this.

It was his dislike for the therapist that

had introduced him to past-life regression,

coupled with the embarrassment about the black

eye he had given said man. That made him seek

elsewhere for answers on his own. He had to

tackle the problem, as he had a fear of losing

all that he had accomplished: the steady climb

up a corporate ladder—although in his case,

it was more of a fancy marble staircase. This

had been accomplished through hard work and an

Seeking to understand past lives was the very

reason he found himself in one of London’s finest

(if not the finest) bookstores that had survived

the bad economy and competition from Amazon

and other online sources. It was there at the

bookstore, Foyles that he was holding a book

from an impressive source, which explained why

such an unlikely and illogical type of therapy