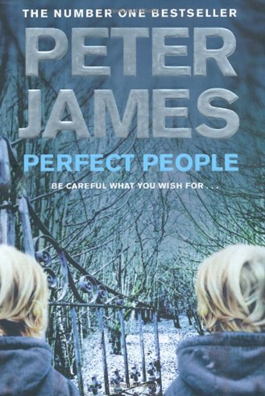 Blurb:
I CAN ERADICATE ALL DISEASES . . .
John and Naomi Klaesson are devastated after the death of their child
from a rare genetic disorder. More than anything they want another, but
the chances of their next child being born with the same defect are high.
I CAN GIVE YOU THE CHILD YOU HAVE ALWAYS WANTED . . .
Then they hear about Doctor Leo Dettore. He has methods that can
spare them the heartache of ever losing another child to any disease,
and so begins their journey.
I CAN MAKE PERFECT PEOPLE . . .
They should have known something was wrong when they saw the list.
Choose the eye colour, hair, great sporting ability. They can design their
child. Now it’s too late to turn back. Naomi is pregnant, and already
something is wrong…

Author Bio:
Peter James was educated at Charterhouse then at film school. He
lived in North America for a number of years, working as a screenwriter
and film producer before returning to England. His novels, many
of which have been Sunday Times Top 10 bestsellers, have been
translated into thirty languages and three have been filmed. He divides
his time between London and Sussex.