Book Blitz and Excerpt: The Watchtower by Darke Conteur 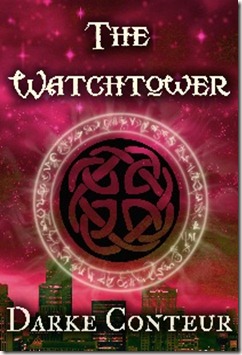 His first day of work wasn't what Martin Cunningham expected. A sultry boss, a classy receptionist, the drama-queen foreigner, and a painfully shy techie who prefers hiding to human interaction, was the oddest group of characters he'd ever met. When an assassination attempt is made against his new boss, Martin comes face to face with the stuff of nightmares.

Now he and his new co-workers must race to prevent another attack, but where do they start? There's very little to go on, and the only solid piece of evidence escaped through the u-bend in the toilet. By the end of the day, Martin becomes one of the privileged few who really understands what lies in the shadows, and what it means to work in THE WATCHTOWER. 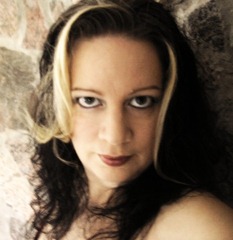 Darke Conteur is an author at the mercy of her muse. Writing in several genres, she prefers paranormal and science fiction and has stories published in several online magazines including Bewildering Stories, Aphelion. When not busy writing, she looks after one wannabe rock star, one husband, three cats, and one ghost dog.


He stepped out of the elevator, package tucked uncomfortably under his arm, and into a Goth’s dream. Old grey flagstones covered the floor and walls, with medieval looking wall sconces holding drippy candles mounted to the wall. A wrought-iron barrier blocked the corridor several feet in front of the elevator. Its cemetery-like gateway pad locked closed.


Martin stood there, dumbfounded, and wondered if being here was the right idea. He didn’t need this job that bad, did he? Yet something pushed him on, edged him to give in to his growing curiosity. Besides, there was still the package to deliver.


He walked up to the gate and squinted, trying to get a better view of what lay beyond. There was a huge wooden desk, nothing on it, and two wooden doors embedded in the wall behind. More of the drippy candles lined the walls, but he didn’t see or hear anyone.


“Hello,” he called out, shifting the package around to his other hip. “The eleven o’clock appointment is here.”


A low and drawn-out creak came from the door on the right as a young blonde woman emerged. Even in this dim light, Martin could tell she wasn’t impressed.


“Sorry,” she said, as the door creaked to a close behind her. “I should have been out here waiting for you, but I hate this hall. Gives me the creeps.”


He recognized her voice immediately as the woman he’d spoken to on the phone the other day. Perfect hair and make-up, fashionable clothing, pink-lace gloves to match her stiletto shoes. She was definitely at odds with her surroundings.


Martin smiled as she unlocked the pad lock with a huge skeleton key. “I know how you feel.” He handed the package to her. “As do some of your delivery guys.”


She gave him a strange look and held the package away from her body.


“You must be Martin Cunningham,” she said, and shoved the package back at him so fast he almost dropped it. “I’m Barb Dole. Jezryall’s personal secretary. I screen all outside applicants who wish to work at Terin Global.”


“She’s a unique person, and you’ll love working for her.” She shot a disgusted look at the package. “You can give that to her yourself. Follow me, please.”


Martin frowned. “How do you know I’ll like working for her, when I don’t even know?


Barb walked up to the wooden door. “We all do. Now hurry up, she probably has a few things she wants you to do already.”


Martin stopped at the front of the desk and tucked the package back under his arm. “Wait a minute. I thought this was just an interview.”


Barb hesitated before opening the door. “Why would you think that?”


“Because you never said anything about me having the job when we spoke on the phone.”


“Yes, I did.” Barb turned the huge brass knob on the door. “I said, ‘you’ll do’, and then told you when to show up for your first day on the job.”


Martin thought back to the conversation. “But how do you know I’m even right for the job?” he asked, walking toward the door. “How do you know I even want this job?”


She gave him a wicked smile. “I just know these things.”


Martin shrugged and walked into the main office. The weirdness of the hall décor continued in there. A cathedral ceiling stretched several floors up with heavy wooden doors scattered around the main floor. There were doors positioned higher up, connected to one another by a wrought-iron walkway. More old sconces with drippy candles lined the walls, and a shiver ran up his spine. It looked as though it had been modeled after Frankenstein’s castle, with one exception: a huge picture window sat directly opposite the door he entered, with a plush black leather chair turned to face the window.


“Jezryall, our new Public Liaison officer is here,” Barb said, as she strolled over to an identical desk as the one out in the hall. There was a pile of fashion magazines fanned out, along with a scattering of manicure objects.


Martin slowly walked toward the chair. “Hi, uh, Miss Jezryall, um, is it?” he stuttered. “I think there’s been some sort of misunderstanding. I haven’t decided whether or not I’m going to take this job. I was under the impression this was only an interview.”


“Were you a member of the debate team at university?” The voice was strong but seductive, with a hint of a Russian accent.


“This means you were good at it?”


“Well, yes. You don’t get to be the Captain unless you are.”


The chair began to turn. Martin’s heart beat faster. How the chair moved, he couldn’t tell, but he knew it wasn’t from the occupant.


“Good. What I need is someone to run interference for me,” she said, “None of us here are any good with dealing with the public.”


Jezryall was stunning. Long, black hair that hung down to her waist, but it was her eyes that struck him. He couldn’t stop himself from staring into their smokey grey, almond shape. He felt as though he were being drawn toward her. She was saucy, seductive. He could see it in the way she moved as she left the chair; her hair falling about her waist as the low-cut, red dress with black lace hugged her well-endowed body. Oddly enough, she was barefoot.

“No!” She walked toward him, keeping her focus on him. Martin was paralyzed, but not with fear. The way she looked at him made him feel like he was the only one in the world. “Barbara has informed me that you are the one we are looking for. And I trust her instincts completely.”


The question left him speechless. What was he supposed to say? Apart from the fact this place gave him the creeps, Martin couldn’t see any reason not to accept it, except for this underlying feeling...


“How about this,” Jezryall said, taking a few steps closer to him. “You work for me for one week, and after that, if you do not want the job, you will be free to go. Two weeks’ pay included, of course.”


Jezryall nodded. “Consider it compensation for your time.”


Martin took a second look around the room. It was creepy, but nothing he couldn’t get used too. At least for a couple weeks. “I guess we have a deal.”
Posted by Unknown at 06:53