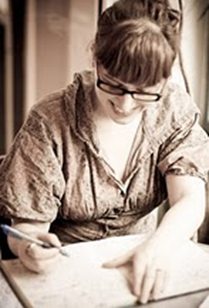 Michelle Franklin is a small woman of moderate consequence who writes many, many books about giants, romance, and chocolate. The sole author of the Haanta Series. She’s been kind enough to write a little short story to wet our appetites about the world of her series.

Coconut
After the commander and Den Asaan used their repose from the Lucentian courts to visit the afamed cafe district, they sat at the grand fountain at the centre of the capital to enjoy the cooling mists bushing against the stone basin where the commander was content to be immobile in the dry, festering heat and where the Den Asaan was equally pleased to take inventory of the numerous deserts he had collected. It was too warm for custard, not cold enough for the sugared creams, but chocolate would do very well for him in such an acrid air. The climate had gained little power over the Den Asaan’s stomach, he being used to the excessive warmth of the northern atmosphere, but where he was gleeful in his allotment of cakes and treats, the commander was merely gratified to be shaded and silent.

Rautu reveled in his task, separating those wrapped articles he would be taking back to the guild and those partially packaged that he would eat now. He was fortunate to have done well in thinking that there could be nothing deleterious in choosing chocolate, but when he lifted the first item to examine it, there was something on the top that he had never before seen: white shavings of a waxy substance curled and sprinkled as a garnishing. He examined them thoroughly, determined they must be edible, but had little idea what they were. The mysterious, glinting fragments had no detectable scent, had little tasted when licked, and upon the whole the Den Asaan was confounded by them.

He held his pastry toward his mate and pointed to the shavings. “What are these?” he demanded in a wary tone.

The commander opened her eyes and exhaled as she wiped the pearls of sweat from beneath her fringe. “That is coconut,” she said after a pause.

Rautu was further bemused by the name of the object, as it seemed to be neither nut nor chocolate. He studied it again, rubbing the waxen curls between his fingers. “Is it a fruit?”

“Many people believe it is,” the commander half-smiled. “If I told you that it was, would you relinquish your treat?”

The Den Asaan regarded the pastry with chariness. He could not decide what should be worse, the devouring of a fruit and perhaps the added horror of liking it or being forced to give his prize away to save himself the dread of being subject to its consumption. He agonized over his internal query until he could endure the site of the coconut shavings no longer and said, “You will explain what this is, woman,” with decided inflection.

“Coconut is the seed of a fruit,” the commander simpered. “The fruit is the hard and brown inedible part, but when chipped away it leaves that lovely white seed behind.”

Rautu had frowned at the coconut during his mate’s explication and held it away from his features, eyeing it with grave concern. “This is from a tree?” he asked in profound uncertainty.

“The seed of one, Iimon Ghaala,” the commander laughed behind a raised hand.

The giant was engrossed in deliberation over the confounding article. By definition, if it was from a tree, then seed or not, it was by all means a fruit, and here was all his apprehension. To openly taste and perhaps enjoy that which he had sworn as his enemy was unconscionable to him. He considered having his mate pick off the shavings but there was no telling if there was more of them on the inside or even if the inside were of a more objectionable matter. This was deception for which the giant was ill prepared, and the commander cackled at his internal confliction as he stood debating the fate of his pastry.

“Do not mock me, woman,” the giant roared in distress.

“Iimon Ghaala,” she exclaimed, wiping the mirthful tears from her eyes. “Honestly. You have eaten other seeds from fruits before.”

“Yes, you have. You have eaten pumpkin seeds.”

Rautu opened his mouth to contend such a statement but was silenced when his mate reminded him of when he had performed such an evil.

“The chocolate butter biscuits from Diras Delights that you adore so well have pumpkins seeds. You make no quarrel about those.”

“I did not know those were from fruits.”

“Of course they are. Where else does one find a seed but in a fruit?”

“Why did you not tell me?” he roared.

“I thought you knew. I was surprised you were eating them. You eat almonds and those are fruits.

“They are not fruits.”

“Of course they are. Almonds are drupes, Iimon Ghaala, just as berries are.”

The terror of the idea struck him. Rautu dropped his hands at his side and glared at his mate with circumspection. She was too assured of her conviction to be attempting deception yet it could not be true. That something as almonds, which he enjoyed tolerably well, should be akin to berries, the most hateful fruit in the world, was deplorable. It must not be. It ought not. It was every way impossible, and yet the indemnity of his mate and her artless smile told him of its being so. Almonds as fruits: this was a grievous notion. Now he would be forced to forbid himself anything with the treacherous nut and would be equally compelled to have it removed from every item in his bakery. He had been used to believe that nuts were a certain safety, but now that nuts were not as they seemed, he must harden himself against every seed, every capsule, and every article in disguise that could be a fruit.

“There are many things people consider to be nuts that are actually something else entirely,” the commander said, adding to her mate’s disenchantment. “Peanuts are legumes, which are still safe for you, pecans and walnuts are drupes just like your friends the almonds, pistachios and pine nuts are seeds.”

Here, the giant must protest. Pistachios and peanuts must be safe. He would not allow her to take them from repertoire of harmless fare. “You are lying to me,” he growled, asserting his point with the coconut pastry in his hand.

“I am not,” she snickered. “If you won’t believe the once-farmer now -commander, you may ask the twins when return to Frewyn. If it’s one thing they know besides ale, eating and corporal pleasures, it’s produce.”

Rautu groaned and writhed in agony. He looked at his trove of Lucentian treasures and noted that most of them contained the very items his mate pronounced. Certainly if pistachios were now seeds, cashews must be a vegetable, and he now considered whether it were advisable to give every treat he had assembled to his mate and begin anew. He pouted, grumbled to himself, and offered the pastry in his hand to the commander with a dejected countenance.

“This is a torment for you, I’m certain,” she crooned, taking the item from his hand. “Alas you have found a whole new set of horrors to worry you.”

Rautu sat on the ground, rested his chin on his hand and sulked in resignation and despair. He could do little else but watch his mate devour the chocolate treat filled with coconut cream. The white substance gleaming in the sun and his mate’s apparent delight from it offended him, and as he turned away from the disheartening seen, he was forced to consider reneging his war on fruits if only to eat almonds in peace, salvage peanuts and defeat the mysterious coconut when he should find the courage to do so.

And here is the first book in the series: 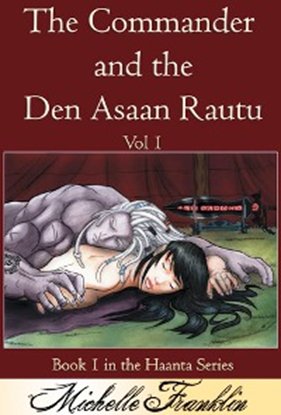 Blurb from Goodreads:
"The Kingdom of Frewyn is being invaded by the Galleisian infantry and at the forefront of the battle is Boudicca MacDaede, a First Captain in the Frewyn armed forces. Her regiment is charged with defending the borders between the two nations, but when Frewyn’s last line of defense falls, Captain MacDaede enlists the assistance of a Haanta, one of giants from the islands to the far north. Promising to free him from his imprisonment in exchange for his help, she gains his trust long enough for them to win the battle and save the Frewyn border from being breached. The giant’s freedom is granted, but Rautu cannot return home unless he redeems himself in the eyes of his people for past his transgressions. He is offered a place by the captain’s side, and together, they defeat the Galleisian forces and become the saviors of Frewyn.

One year later, King Alasdair Brennin takes the Frewyn throne, Boudicca is made commander, Gallei and Frewyn reach an accord, and Rautu is granted an invitation home. He is eager to return and see his brothers but finds it difficult to leave Frewyn without Boudicca at his side. He has become accustomed to her company and the idea of being made to live without her begins to distress him. Rautu invites the commander to the islands in hopes of finding a way for them to remain together, but when they arrive at the white shores of Sanhedhran, not everything goes as planned: one of the dangerous Haanta magi is freed, Rautu’s three brothers are strangely missing, and the neighboring nation of Thellis leads an attack on the islands.

Together, the commander and the Den Asaan Rautu must find a way to unite their two nations and defend against the Thellisian fleets, but can they do so successfully when outside forces are attempting to keep them apart?"

Michelle has generously offered an eBook copy of her book to a lucky reader.  So if you are eager to read more, leave a comment and I will draw a name on Sunday, 04 September 2011 and give your details to Michelle.