I received this book from Marshall Cavendish Children’s Books and decided to share it with my South African blogging buddies.  Bella from Absolutely Obsessed read it and sent the following review.  Thank you Bella and Marshall Cavendish! 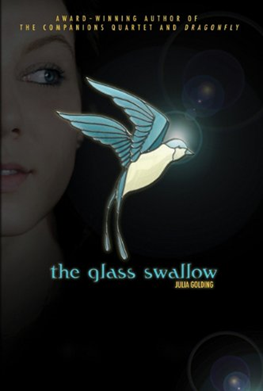 Blurb from Goodreads:
Rain She designs exquisite stained glass for the windows of her city. But the law is clear — it is forbidden for girls to be part of the glassmaker's guild. To keep her secret hidden, she leaves home and travels to the strange new country of Magharna.
Peri When he witnesses Rain's capture by a gang of bandits, both his fate and his heart becomes tied to hers. They escape the outlaws, but Peri and his family of falconers are untouchables who are scorned by all, and Rain is not allowed to be part of their lives. Can Rain and Peri's love survive the prejudices against them? And with the city on the brink of disaster will they be able to stop their world from smashing apart?

And over to Bella for the review . . .
Although the blurb sounded interesting enough, I really wasn't expecting all that much from The Glass Swallow ... I mean, the cover's about as uninspired as it gets, IMHO, which shouldn't really make a difference, but - you know - IT DOES. Colour me surprised, though, because - although there are flaws aplenty - it turns out that the story's pretty darn entertaining!! :) :)

The blurb wants you to believe that The Glass Swallow revolves around the romance between Rain, a girl who - despite the laws of her country - practises glassmaking, and Peri, the falconer who saves her from death-by-bandit not long after she touches down on the shores of his exotic homeland, Magharna. Well, okay, so there IS a rescue, but it takes place a good quarter of the way into the book, after a whole lot of blah blah blah introductory stuff, since the characters start off with an OCEAN between them!! :o Also, you can forget about a believable romance, as Peri - obviously not much into heroic acts and the rescuing of damsels - summarily dumps Rain on the doorstep of Rolvint, the capital city, then just - well - goes. Yeah. Rain can barely speak the native language and all of her companions have just been slaughtered ... she also looks different, almost fey-like, to the superstitious Magharnans, with her curly red hair and blue eyes ... also, Rain's a freaking girl alone in a strange land, tiny and defenseless ... but Peri justifies abandoning her to her own devices, even though she asks to accompany him home, because he's so low in class that he's "untouchable", so - you know - she OBVIOUSLY doesn't want to be near him, EVEN THOUGH SHE CLEARLY INDICATED OTHERWISE, and there's probably someone waiting in the city for her. Probably. Nice.

Months later, after some half-hearted attempts to find out whether everything turned out okay for Rain (and hearing nothing), he discovers her working as an abused servant. Do you want to guess what he does next?? If you thought "NOTHING", you're right!! Oh, wait, he does try to convince her that he was right in leaving her at the city gates so many months ago. Ahem.

Throughout all of this, the cracks in the capital city's foundations are being revealed. The rigorous class system is cruel and the more people get thrown out of Rolvint, because the city no longer has work for them, the more bandits there are to stir up chaos in the surrounding countryside. One bandit strike too many and everything goes to hell in a handbasket. As one of the scavengers, looked down upon by the higher classes for working with hunting animals, Peri lives with his family outside of the city, therefore he's safe - for now. Rain, however, is not. That's what Peri thinks, at least. Rain's in fact totally awesomesauce. She's smart and cunning and - by the time Peri gets off his butt to search for her, as well as their mutual friend, an old man by the name of Mikel - she's done a splendid job of hoarding food and scaring away potential looters and just generally making sure that she and Mikel are safe. He demands that she go home with him ... she insists on swinging by the palace, to give the main dude in charge of Magharna a kick up the butt for letting his city degenerate to such a terrible degree ... and suddenly Peri's kissing her!! Wait, what?! Yeah. I was as surprised as Rain.

Then there's the bizarre class system, which is kooky TO PUT IT MILDLY. I mean, nobody is allowed to talk to anyone in a class beneath them, which is really dumb, especially since they just stand there ignoring people speaking to their faces. Also, the scavengers are considered unclean and treated like crap just because they work with hunting animals, even though the higher classes do actually eat the meat they procure. There are a lot of similar things and they all just come off as - well - stupid, especially since we are never told WHY the Magharnans follow these strange customs, or given any kind of an explanation, which might make the crazy a little more believable. Rain's homeland suffers from this same problem, too, as it apparently is so enlightened and fair, yet STILL does not allow women to do anything but marry and breed. Uh ... ?? There's a lot of telling, instead of showing, going on, too ... and I really wish that the author had expanded on her world-building, while she was at it, because that certainly would have been welcome!! :P

However, apart from all of this, the plot's pretty interesting and I did eventually get completely sucked in. Peri leaves much to be desired, as you can probably tell, but Rain's amazing. She's a foreigner in a country gone mad, but also apparently the only person with enough brains to look past the problems at hand and on to long-term solutions for everyone. I freaking heart her. Also, Mikel's a wonderful character, and I really like the children, too ... although I won't spoil who they are, hehe!! :D For the most part, though, the characters are largely stereotypical, often to the point of being silly, but - yeah - the story itself is good.