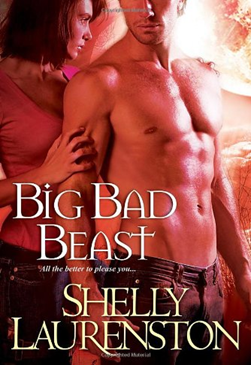 When it comes to following her instincts, former Marine Dee-Ann Smith never holds back. And this deadly member of a shifter protection group will do anything to prove one of her own kind is having hybrids captured for dogfights. Trouble is, her too-cute rich-boy boss Ric Van Holtz insists on helping out. And his crazy-like-a-fox smarts and charming persistence are making it real hard for Dee to keep her heart safe...
Ric can't believe his luck. He's wanted this fiercely independent she-wolf from day one, but he never expected teamwork as explosive as this. And now is his last chance to show Dee what she needs isn't some in-your-face Alpha male - but a wily, resourceful wolf who'll always have her back in a fight...and between the sheets.

If you like your heroines headstrong and feisty and your heroes in the shifter variety, you will love this zany series by Shelly Laurenston.  The Pride series are filled with crazy shifter characters of all varieties and hot, exploding chemistry.  I finished this sizzling book in two sittings – I just couldn’t put it down!

Dee-Ann has been a difficult character to like from the beginning of the series.  She has been a downright bitch for the most part but in this, her and Ric’s book, she shows him (and us) her softer side.  She is still true to herself and always ready for a fight but when it comes to Ric, she just melts (don’t tell her I said that!!).

Ric is part of the rich Van Holtz family and they are not too keen on inviting this hillbilly into their lives but Ric will not be swayed.

It was fun, seeing the male strategizing about ways to win his mate this time around.  Off course Ric did announce that Dee-Ann was the one for him when he first met her at age six, so he knew what he wanted.  He just needed to convince Dee-Ann to chase him (and she did!).

Most of the characters from the other books also make appearances in this book and it is great fun seeing them interact again.  I especially loved reading about the beloved bubblehead, Blayne, trying to help Ric win Dee-Ann.

Apart from the romance, there is also some tense moments while Dee-Ann and her team try to catch the ringleaders behind the shifter hybrid dogfights.  There’s never a dull moment with the team always just a second too late!

The tense drama is balanced by laugh out loud humour.  You will be roaring with laughter while reading about Dee-Ann’s search for a formal dress.

I loved this book (as with the rest of the series) and you will not be disappointed.  You do not need to read the series in order (or at all) but you will be missing out if you do not read the other characters’ books.

This review was also published at The Romance Reviews – here.