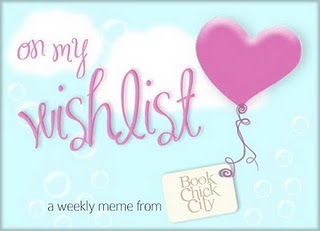 On My Wishlist is a fun weekly event hosted by Book Chick City and runs every Saturday. It's where you can list all the books you desperately want but haven't actually bought yet. They can be old, new or forthcoming. It's also an event that you can join in with too - Mr Linky is always at the ready on Carolyn’s blog.  This is the books I am wishing for after I saw it on fellow bloggers' sites.

by Shelley Workinger
Eighteen years ago, a rogue Army doctor secretly experimented with a chromosomal drug on unknowing pregnant women. When he was killed not long after the children were born, any knowledge and evidence seemed to die with him - except for the living, breathing, human products of his work. Almost two decades later, the newly self-proclaimed "open-book" military unearths the truth about the experiment, bringing Clio Kaid and the other affected teens to a state-of-the-art, isolated campus where they soon discover that C9x did indeed alter their chromosomes, its mutations presenting as super-human abilities. The military kids, who come from across the nation and all walks of life, come into their own as lighter-than-air 'athletes'; 'indies' as solid as stone walls; teens who can make themselves invisible and others who can blind with their brilliance. While exploring her own special ability, forging new friendships and embarking on first love, Clio also stumbles onto information indicating that the military may not have been entirely forthcoming with them and that all may not be as it seems...

Magic is about to get an upgrade. Ravirn is not your average computer geek. A child of the Fates-literally-he-s a hacker extraordinaire who can zero in on the fatal flaw in any program. Now that twenty-first-century magic has gone digital that makes him a very talented sorcerer. But a world of problems is about to be downloaded on Ravirn, who's just trying to pass his college midterms.
Great Aunt Atropos, one of the three Fates, decides that humans having free will is really overrated and plans to rid herself of the annoyance by coding a spell into the Fate Core, the server that rules destiny. As a hacker, Ravirn is a big believer in free will, and when he not only refuses to debug her spell but actively opposes her all hell breaks loose. Even with the help of his familiar Melchior, a sexy sorceress (who's also a mean programmer), and the webgoblin underground, it-s going to be a close call...

I Was Jane Austen's Best Friend

by Cora Harrison
When shy Jenny Cooper goes to stay with her cousin Jane Austen, she knows nothing of the world of beautiful dresses, dances, secrets, gossip, and romance that Jane inhabits. At fifteen, Jane is already a sharp observer of the customs of courtship. So when Jenny falls utterly in love with Captain Thomas Williams, who better than Jane to help her win the heart of this dashing man?

But is that even possible? After all, Jenny’s been harboring a most desperate secret. Should it become known, it would bring scandal not only to her, but also to the wonderful Austen family. What’s a poor orphan girl to do?

In this delicious dance between truth and fiction, Cora Harrison has crafted Jenny’s secret diary by reading everything Jane Austen wrote as a child and an adult, and by researching biographies, critical studies, and family letters. Jenny’s diary makes the past spring vividly to life and provides insight into the entire Austen family—especially the beloved Jane.

by Joelle Anthony
In 2041, when the world's depleted oil supplies have forced governmental failures and the emergence of a black-market economy, 16-year-old Molly McClure travels to Oregon to convince her aging grandparents to join the rest of the family in British Columbia. That plan takes a backseat to the drama unfolding next door—where two children are being cared for by their drunken, gambling uncle—and Molly may have two more passengers for the return trip, if she can convince anyone to go. After taking a few chapters to focus the characterization and plot direction, Anthony delivers a plucky heroine with a musical gift, a taste of romance, and a family-values-based narrative about dealing with unexpected circumstances. The tone is hopeful, and there is an innocence to the storytelling that makes the main character seem much younger than her years, in spite of her ability to face down the rough guys.