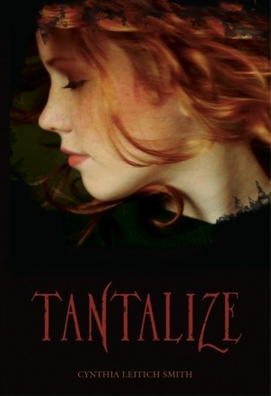 Goodreads blurb:
Are you predator or prey?
CLASSIFIED ADS: RESTAURANTS
SANGUINI'S: A VERY RARE RESTAURANT IS HIRING A CHEF DE CUISINE. DINNERS ONLY.
APPLY IN PERSON BETWEEN 2:00 AND 4:00 PM
.
Quincie Morris has never felt more alone. Her parents are dead, and her hybrid-werewolf first love is threatening to embark on a rite of passage that will separate them forever. Then, as she and her uncle are about to unveil their hot vampire-themed restaurant, a brutal murder leaves them scrambling for a chef. Can Quincie transform their new hire into a culinary Dark Lord before opening night? Can he wow the crowd in his fake fangs, cheap cape, and red contact lenses — or is there more to this earnest face than meets the eye? As human and preternatural forces clash, a deadly love triangle forms, and the line between predator and prey begins to blur. Who’s playing whom? And how long can Quincie play along before she loses everything? TANTALIZE marks Cynthia Leitich Smith’s delicious debut as a preeminent author of dark fantasy.

This is not your normal vampire story.  Yes, there are vampires and were-creatures but not everyone is who they seem.

Quincie is a 17 year old orphan that seems to be very mature for her age.  She almost single handily runs the family restaurant and takes care of her very absent minded uncle.

She is in love with her best friend, Kieran but they never become more than friends . . . so romance is not part of this story. Maybe in the sequels we will get a glimpse of the love we can clearly see between Quincie and Kieren (here is hoping!).   Although there seems to be hints about a lovers triangle, this never happens either.

For me it is important to love the characters in a book, especially the main heroine.  Unfortunately Quincie and her choices quickly changed my opinion of her.  She was portrayed as a very mature girl and so it was difficult to accept her attitude and actions.   After that it was difficult to keep focused on the story.

I am not sure if it is just because I am an adult, but I guessed early on who the bad guys were.  Easy clues, like a guardian that keeps giving wine to his 16 year old niece, should send up warning lights even to the 17 year old!

Once again, I felt that this book was just the beginning and was mostly character building for the sequels to come.

The second book in the series is:  Eternal