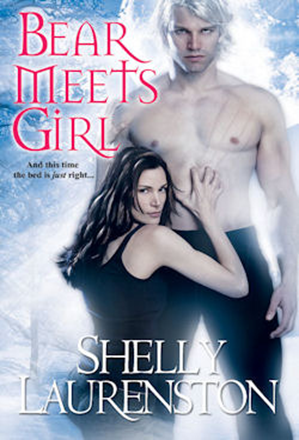 Goodreads blurb:
He's big, burly, and way smarter than your average shapeshifting bear. He's also about to get trapped by own his game. . .

Lou Crushek is a reasonable, mellow, easy-going kind of guy. But once someone starts killing the scumbags he works so hard to bust, that really gets under his fur. Especially when that someone is a curvy she-tiger with a skill set that's turning Crush's lone-bear world upside down--and bringing his passion out of hibernation. . .

As a member of an elite feline protection unit, Marcella Malone has no problem body-dropping anyone who hunts her kind. But Crush is proving one major pain in her gorgeous tail. The only reason she's joined forces with him is to track down the wealthy human who's got her entire species in his ruthless sights. It sure isn't because Crush's stubborn and contrary attitude is rubbing Cella in all the right ways. . .

My thoughts:
Once again my favourite author does not disappoint.  This book is filled with much loved characters from previous books as well as a few new ones that I am sure we will get to know in future books.  The laughter and the fun does not stop for one second throughout this book.

This time we are giggling along as Cella teases the poor, no-nonsense Lou throughout the book.   He is so naive and totally confused by this strange female that he just can’t seem to shake!   He is totally adorable even though he is a six foot+ polar bear.  And when he gets totally tongue-tied meeting his hockey idols, I couldn’t help loving him even more.

He soon finds out that Cella is part of the KZS (a undercover unit that protects shifters) and they get thrown together to try and stop an evil villain that is literally stuffing some of their kind.  Lou’s past comes into play and soon the villains are hitting too near to home!

As usual, the action is fast passed and all the characters from previous books makes an appearance and adds to the humour for those laugh-out-loud moments.  My one complaint this time around is that the romance between Cella and Lou is only mentioned in passing and then abruptly they “live happily ever after”. A little more together time could have been nice :) But this did not take anything away from the book – I totally fell in love with this book.  I am so sad that only one book is released every year!

This review was also published on The Romance Reviews website.