Fallenwood—a land where magic is the life force, dragons are sages, and 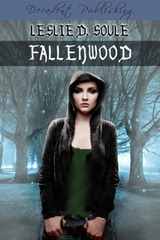 wizards good and evil battle for supremacy. When 23-year-old Ash is thrust into the middle of Fallenwood’s power struggles, she is also forced to face her own inner battles. Life on Earth was hard enough on Ash, who is locked in grief for her stepfather. Now, the fate of Fallenwood rests on her shoulders. She must destroy the Great Crystal—the catalyst for all the land’s magic. As the kingdoms prepare for war, Ash must look inside to find the power to save the world, and herself. 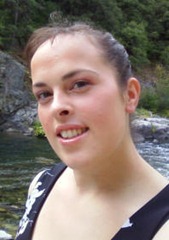 Leslie Soule lives in Sacramento, California. Fallenwood is her first fantasy novel. She has received her B.A. in English from Sacramento State University and is currently working on her Master’s degree in English at National University.

Leslie, when did you start writing?
I’ve been writing since I was little. I used to write stories to go along with the things I drew. Then when I was older, I had a word processor that I just loved – sort of the in-between of a typewriter and a computer.

Does your family support you in your writing?
Definitely. My family has always been very supportive of my endeavours.

What would be able to distract you from your writing?
Chocolate, hot blond guys, one of my martial arts buddies wanting to practice…a lot of things, really.

What inspired you to write this book?
When my stepfather passed away, I didn’t know how to deal with the emotions and thoughts that I experienced. Writing became a kind of therapy for me, and Ash’s journey became my own.

What kind of research did you have to do?
I tried writing with a quill and ink on parchment. It was fun. :)

I LOVE the cover - who designed it?
Dara England. She’s amazing!

What is your next project?
I’m currently working on Fallenwood’s sequel and on a biography of my stepfather.

If you could meet any of your characters, who would it be and why?
I would want to meet Will, because it would be fascinating to meet a sorcerer and figure out the details of what living with magic is really like.

A typical day in your life would be . . .
I wake up, go to work for the State, then go and work out at the martial arts studio, stay up for a bit writing or doing things online, and then sleep. Nothing too crazy.

What is the hardest thing about being an author?
Dealing with criticism and rejection is the hardest part, I’d say. You put your heart into the things you work on, and it’s hard to deal with the idea that someone else may not like it or see it the way you do.

Do you hear from your readers much?  What do they say?
I’ve gotten excellent feedback from my readers, about what worked and didn’t work with Fallenwood, and I think it’s really helped. With the sequel, I hope to correct a lot of the errors I made in writing the original.

Who are some of the authors that inspire you?
Maureen O. Betita, Robert C. Roman, Deena Remiel, whom I’ve met and have helped me along.

What is in your own TBR pile?
For the past year and a half, I’ve been working toward my master’s degree, so my TBR pile is absolutely gargantuan.

Expert from Fallenwood:
Tears blinded her. She couldn’t stop and even the rough winds couldn’t

scatter the wild thoughts that swirled in her mind—memories of her stepfather, words that people had said at his service, images of her mother and that stupid grin she wore—all she could do was run. Ashley was deeply wounded but was powerless to heal this kind of pain. She’d looked into the face of evil. Her feet hit the gravel, and the wind whipped at her face as she tried to outrun her anguish. She closed her eyes for a split second, and the wind stilled, and she stopped. Ashley looked around her. It had suddenly become night, and she was now in an unfamiliar part of the woods.