I can’t believe I missed this dystopian series by Anthony Horowitz.  I read a review of the last book in the series, Oblivion, and now I am definitely in search of all five books. This chilling NYT bestseller from Anthony Horowitz, "a master of edge-of-your-seat writing" (Booklist, starred) is "an exhilarating read" (Kirkus) that "should attract a strong following" (PW)
As punishment for a crime he didn't really commit, Matt was given a choice: go to jail or go live with an old woman named Mrs. Deverill in a remote town called Lesser Malling.
He should have chosen jail.
A strange and sinister plan is coming together made in Lesser Malling, with Matt at the center of it all. People who try to help him disappear . . . or die. It all ties to an evil place named Raven's Gate - a place whose destiny is horrifyingly intertwined with Matt's own.

The second thrilling, chilling installment in Anthony Horowitz's bestselling Gatekeepers series.
Matt thought his troubles were over when he closed Raven's Gate . . . but in fact they were just beginning. His fate -- and the fate of the world -- is tied to four other kids across the globe. The second is a street kid in Peru. He and Matt have never met; they don't even speak the same language. But destiny is going to throw them together as the evil threat of the Old Ones grows . . . and another Gate suddenly comes into play.
Another masterful thriller from supernaturally suspenseful Anthony Horowitz.

The world is in great danger�and only five kids can save it. But to do that, they must face off against some of the most powerful people in the world. Two of the five, Scott and Jamie, have always known they were different. Twins whose birth is shrouded in mystery, they�ve always been able to communicate with each other telepathically. Their supernatural talent has landed them no farther than a gig in a Z-grade sideshow in Reno, Nevada...until they garner the attention of a very scary clientele. Soon their lives are in jeopardy, with one of them trapped and one of them on the run. In Nightrise, Anthony Horowitz ups the stakes in his most thrilling, intense novel yet.(less) Hong Kong has been taken over by the Old Ones and has become Necropolis, City of the Dead. Once in, there is no way out… Evil has been unleashed on the world and only five children – with special powers – can save it. Matt and the other three desperately need to find Scar, the final Gatekeeper, who has been trapped in Hong Kong, where puddles of water turn into puddles of blood, where ghosts, demons and hideous creatures stalk the streets. Matt has no choice but to follow her. Now, both imprisoned, their only hope of survival is to reach a secret door in the Man Ho temple. But even if Scar can find her psychic power, it may already be too late.(less) Having escaped from Hong Kong, the five gatekeepers - Matt, Pedro, Scott, Jamie and Scarlett - are scattered in a hostile and dangerous world. As they struggle to re-group and plan their next move, the malevolent King of the Old Ones gathers his forces in Oblivion: a desolate landscape where the last survivors of humanity must fight the ultimate battle. 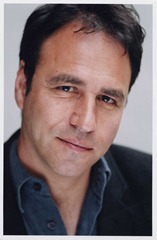 Anthony Horowitz is one
of the most prolifi c and
successful writers working
in the UK today. He is a born
polymath; juggling writing
books, TV series, movies,
plays and journalism.
Anthony has written over
35 books, including the
bestselling teenage spy
series ALEX RIDER, which he
adapted into a movie released worldwide in 2006.
The nine ALEX RIDER novels have sold over 13 million copies
worldwide. Anthony is also an acclaimed writer for adults and
was commissioned by the Conan Doyle Estate and Orion Books
to write a new Sherlock Holmes novel. Published in November
2011, THE HOUSE OF SILK was a huge success worldwide.
THE POWER OF FIVE sequence, to which OBLIVION is the epic
conclusion, has a broad readership, ranging from young fans
through to adult.
Anthony is responsible for creating and writing some of the
UK’s most beloved and successful TV series, producing the fi rst
seven episodes of MIDSOMER MURDERS. He is the writer and
creator of the BAFTA award-winning drama series FOYLE’S WAR.
Filming begins on the next series of FOYLE’S WAR this summer
for broadcast in 2013. Anthony has also written other original
complex dramas for ITV, including COLLISION (which aired in
2009 and reached seven million viewers a night during its fi ve
night run) and INJUSTICE (transmitted in 2011 to widespread
acclaim).
Anthony is currently working with Steven Spielberg and Peter
Jackson, writing the sequel to TINTIN. He is also working on
another screenplay for Warner Brothers.
Anthony regularly contributes to a wide variety of national
newspapers on subjects ranging from politics to education.
He has been a patron to East Anglia Children’s Hospices and
Kidscape since 2009. Amongst many plaudits, he was especially
thrilled in 2011 to be presented with a gold BLUE PETER badge,
celebrating his body of writing for young people.
Anthony is married to TV producer Jill Green, whose production
company has produced FOYLE’S WAR, COLLISION and INJUSTICE
amongst other hit shows. The couple have two sons and divide
their time between London’s Clerkenwell district and Orford,
Suffolk.
For more about Anthony’s life and work, go to www.
anthonyhorowitz.com